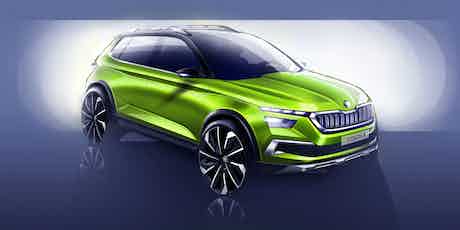 Skoda will reveal a concept version of its new Fabia-sized SUV at the Geneva Motor Show. Full details on this Vision X here…

Skoda’s confirmed it’ll reveal a concept SUV called the Vision X at the 2018 Geneva Motor Show on 6 March. It’ll give us our best idea yet of what the upcoming Fabia-sized rival for the SEAT Arona and upcoming VW T-Cross will look like when it goes on sale in late 2018.

The Vision X looks similar in profile to the SEAT Arona – it even comes with a similar contrasting roof and black wheel-arch trims to exaggerate its ride height. At the front you’ll find four angular headlights – similar to those on the larger Karoq – and a set of silver metal-effect trims that imitate the solid skid-plates on hardcore off roaders.

Some thick creases on its doors help prevent the Vision X looking too tall and bulky while a set of four brake lights at the back make sure it won’t be mistaken for a Karoq or a Kodiaq. None of this is particularly earth-shattering stuff, however, and the upcoming production model might struggle to stand out in the increasingly crowded small-SUV market as a result.

A single teaser image shows us what to expect from the new car’s interior. A large touchscreen infotainment system will dominate the dashboard while conventional analogue dials appear to have been replaced by a digital driver’s display. This feature isn’t expected to come fitted as standard to the finished car, however, but may be an option.

What should make an appearance are a number of soft, squidgy plastics, some colourful plastic trims and plenty of handy cubby holes to help keep the car’s cabin looking as tidy as possible.

Headroom and leg room won’t be quite as generous as in the larger Karoq but there’s still expected to be space for adults to sit in the back. The new car’s boot capacity should outstrip that of the SEAT Arona, too.

The new Skoda will be built using lots of components borrowed from the Arona including its engines. As a result, you’ll probably get to choose from a range of 1.0-litre petrols and 1.6-litre diesels but Skoda hasn’t confirmed whether it’ll come with the option of four-wheel drive.

You will, however, be able to get it with either a manual or a quick-shifting DSG automatic gearbox – perfect for making long journeys and rush-hour commutes that bit more relaxing.

The new Fabia-sized SUV should cost from approximately £16,000 when it goes on sale in late 2018 or early 2019. Official details haven’t been released but top-spec cars could set you back approximately £22,000 – around the same as a range-topping Arona.