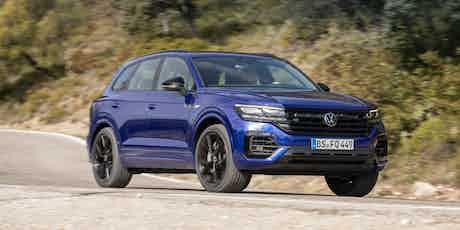 The high-performance Volkswagen Touareg R is now on sale, with prices starting at £71,995

The Volkswagen Touareg R is now on sale, with this flagship performance SUV coming as the most powerful VW to date.

You can order a Volkswagen Touareg R now, though you’ll have to part with £71,995 to get behind the wheel of this hybrid SUV.

Volkswagen hasn’t said when first deliveries are due to come, but it’d be fair to expect to get a hold of the keys before summer if you put your name down today.

In typical Volkswagen R model fashion, the Touareg R gets some subtle though effective tweaks to indicate it as the range-topping performance version of the SUV.

Upfront, there’s a more aggressive-looking front bumper with larger air intakes, while the rear gets a gloss black diffuser and a twin-exit exhaust setup. You’ll get black-painted 22-inch alloy wheels and, if that wasn’t enough to mark it as a high-performance option, there’s R badging on the front grille, wheel arches and tailgate.

It gets the same standard equipment as the Volkswagen Touareg Black Edition as well, so that means matrix LED headlights, plus LED tail- and daytime running lights. You’ll get a panoramic roof as standard, as well.

Hop inside the Volkswagen Touareg R and interior that, on paper anyway, looks deserving of its price tag. Diamond-quilted leather heated and ventilated seats are a standard item, with the R also getting a leather-wrapped, heated steering wheel too.

The same pattern of leather for the seats is copied for the door cards, and there’s blue trim piping scattered all over the place. There’s ambient lighting with a choice of 30 colours as well, plus more R branding including on the scuff plates.

You’ll get a 15-inch infotainment system and a 12.3-inch digital driver’s display as well, the latter of which even has a night vision mode to help you see the road ahead in the dark.

Being the most expensive Volkswagen on sale in the UK, the Touareg R is unsurprisingly loaded with kit. Air suspension with a self-levelling function is included in the price, plus there’s a 360-degree parking camera to help you put this behemoth into spaces easily.

Four-zone climate control comes as standard too, and you’ll get adaptive cruise control with lane-keeping assistance and the ability to read road signs and match speed accordingly.

The Volkswagen Touareg R gets a pretty punchy plug-in hybrid engine setup, with a 3.0-litre petrol V6 paired up with a 14.3kWh battery. It’s good for 462hp and 700Nm, sent to all four wheels through a DSG automatic gearbox, allowing the Touareg R to do 0-60mph in 5.1 seconds before hitting a limited 155mph top speed.

Volkswagen claims it can do 28 miles on electricity alone, as well as return fuel economy of 94.2mpg.

Can’t wait for the Volkswagen Touareg R? Take a look at the fastest SUVs on sale or get the latest offers on the Touareg range