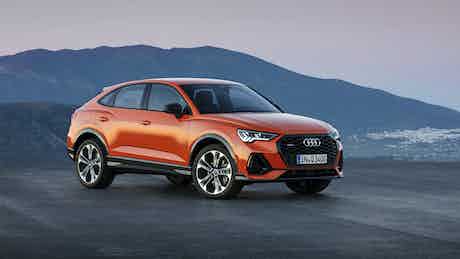 This is the new Audi Q3 Sportback, set to become an alternative to the Mercedes GLC Coupe and BMW X4. Read on to find out more about this new coupe-SUV.

First deliveries of the new Audi Q3 Sportback are expected towards the end of the year. Expect the range to start from a little less than £40,000 for the lower-priced, diesel-powered 35 TDI, with the petrol-powered 45 TFSI set to cost in the region of £43,000.

The Sportback looks similar to its regular Q3 cousin, but it is distinguished by a lower roofline – making the car 3cm lower – and a rakishly angled rear hatch. You might also note the absence of roof rails and the addition of a tailgate spoiler. There’s a different treatment to the lower rear bumper, too, with a more squat appearance and redesigned air vents.

At the front, the framed grille gets a 3D-effect hexagon pattern, while the door mirror caps and window trim are black rather than chrome. The Sportback also rides on chunky 20-inch alloy wheels, as opposed to the 18s you’ll find on entry-level Q3s.

You get a choice of two engines in the Q3 Sportback: one petrol and one diesel. The diesel engine, badged the 35 TDI, is a 150hp, 2.0-litre unit that can deliver up to 50mpg. It gets front-wheel drive. The petrol-powered 45 TFSI gets 230hp from its turbocharged 2.0-litre engine and has four-wheel drive, but fuel economy is only around 32mpg. Performance figures for these engines are yet to be revealed, although they both use Audi’s S Tronic automatic gearbox (Audi says that a manual transmission will be available for the diesel “shortly after market launch”).

More engines will be joining these two later down the line. They will include another – more powerful – diesel unit and a petrol-electric one with mild-hybrid technology. The hybrid’s motor will provide some extra oomph during low-speed acceleration; its 48V battery will recover energy otherwise wasted during braking.

The Q3 Sportback comes with Audi’s Drive Select system, which lets you pick from six different modes that control how the car feels on the road. This adjusts everything from the shock absorbers to the steering responsiveness to the firmness of the suspension, letting you switch between comfort-oriented, sporty or even offroad-biased driving.

The Sportback’s interior remains largely the same as the normal Q3, but there are a handful of notable differences. This car’s body is narrower than the standard one’s, although Audi claims that its rear bench is still able to seat three fully-grown adults. That slightly lower roof may have some effect on rear headroom, too – which feels generous even for six-foot-tall adults in the standard Q3 – but that remains to be seen. The Sportback still has the same boot size as the SUV, with a 530-litre capacity. Elsewhere, precious little has changed compared with the regular Q3; aesthetically, the new car’s interior is basically identical to the SUV’s.

There is some new technology to be found in the new Q3 Sportback, alongside the familiar 10.1-inch MMI infotainment touchscreen and optional 12.3-inch Virtual Cockpit. Amazon’s Alexa personal assistant, with voice control, has now been integrated, as has a system that allows the Sportback to read and preempt traffic light signals.

Bookmark this page to stay up to date on the new Audi Q3 Sportback.