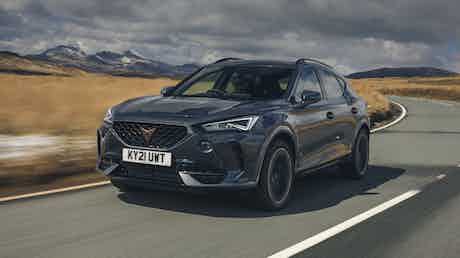 A new hybrid engine is now available for the Cupra Formentor, bringing a lower starting price for the plug-in SUV. Read on for full details.

A new hybrid engine is now available for the Cupra Formentor, which lowers the starting price of the plug-in version of the performance-oriented SUV.

This alternative to the Audi Q3 Sportback and BMW X4 now starts from £35,770, with deliveries imminent.

This new ‘e-Hybrid’ engine uses a 1.4-litre petrol engine linked up to an electric motor for a total power output of 204hp. This is sent to the front wheels through a seven-speed DSG automatic gearbox.

That’ll send the Cupra Formentor from 0-60mph in 7.8 seconds and a 127mph top speed. Cupra says it’ll return 235.4mpg — though you’ll have to plug it in very often to manage that — while also being capable of 37 miles on electricity only.

New 190hp and 245hp ‘4Drive’ all-wheel-drive versions of the Cupra Formentor are now available too. These are both based on a 2.0-litre turbocharged petrol engine and use the same DSG gearbox as the e-Hybrid.

You can have the Cupra Formentor e-Hybrid in V1 and V2 trims.

Orders are now being taken for the Cupra Formentor e-Hybrid, along with the new petrol-powered versions of the car.

Pricing for the e-Hybrid kicks off at £35,770, rising to £37,600 for VZ2 versions of the car. Deliveries should follow imminently.