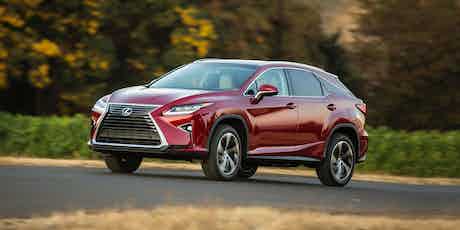 Lexus has revealed prices and specification for the latest RX SUV, which offers petrol or hybrid power and hits UK roads in January 2016

Lexus’s flagship SUV, the RX, was one of the first luxury crossovers to combine a car-like driving experience with the raised driving position and chunky styling that modern SUV drivers seem to love. Now in its fourth generation, Lexus has released pricing information for the new RX which customers can now order ahead of deliveries starting in January 2016.

The RX is an incredibly important car for Lexus because it is its largest selling vehicle globally. In the UK, it competes with the likes of the BMW X5, Mercedes GLE and Volkwagen Touareg for the attention of well-heeled buyers.

Traditionally the RX’s trump card has been the presence of a hybrid engine – similar to the one used in Lexus’s other hybrids and the Toyota Prius. However, with rivals beginning to offer hybrid systems in their models too, Lexus has now decided to offer a 2.0-litre turbocharged petrol engine as an entry level unit – the same one found in both the IS saloon and NX crossover.

Top of the range F-Sport trim is an additional £3,000 and features a sportier bodykit and wheels, adaptive suspension and, importantly for some, rear sun shades.

Those after more power and better fuel economy should look at the RX 450h hybrid which costs from £46,995 in SE grade trim. The SE features similar equipment to the S but adds leather seats and all-wheel drive. Luxury models are an additional £3,000 and F-Sport another £3,000 on top.

Buyers after the ultimate RX experience will want to opt for the £57,995 RX450h Premier model, which gets all the goodies from the F-Sport but also has a head-up display, Mark Levinson sound system and a heated steering wheel.

Spec up your ideal next car in our car configurator. For more options, head over to our deals page or, if you still need help picking your next car, check out our car chooser.