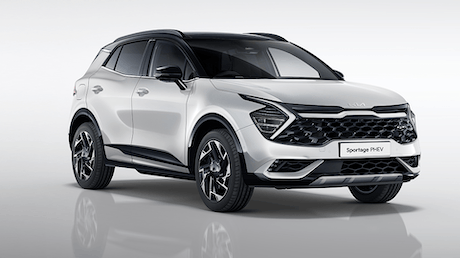 Prices and specs for the new Kia Sportage Plug-in Hybrid have been confirmed. Entry-level models will set you back from £38,395.

Orders are now being taken for the new Kia Sportage Plug-in Hybrid, which can be yours from £38,395.

If you place your order for this Ford Kuga and VW Tiguan alternative now, you could be among the first to take delivery from April.

For your £38,395, you’ll get the Kia Sportage Plug-in Hybrid in GT-Line spec. As standard, this comes with 19-inch alloys wheels and a 12.3-inch infotainment system. You’ll also get adaptive cruise control and a host of safety tech.

Following that at £41,795 is the ‘4’ model. This brings automatic LED headlights, ambient interior lighting, a panoramic sunroof plus an upgraded Harman Kardon audio system.

Sitting at the top of the range is GT-Line S. This packs the Sportage with more goodies including a two-tone roof, suede interior trimmings, ventilated front seats and an electric tailgate. It starts at £43,795.

All versions of the Kia Sportage Plug-in Hybrid are powered by a 1.6-litre turbocharged petrol engine linked up to an electric motor.

Together they produce 265hp and 350Nm of torque, delivered through a six-speed automatic gearbox, resulting in a 0-60mph time of 7.9 seconds.

With a 13.8kWh battery on-board, it’s claimed the Kia Sportage Plug-in Hybrid can cover up to 43 miles of electric-only driving.

Keen for a new Kia Sportage? Check out the latest deals or compare other new SUVs