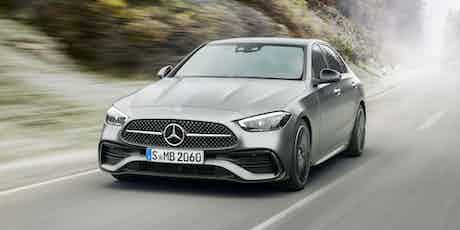 An all-new version of the Mercedes C-Class has been revealed, packed with technology and a completely redesigned interior. Read on for full details.

The Mercedes C-Class is a well-established alternative to the BMW 3 Series and Audi A4, and a brand-new version has just been revealed. It gets a revised look, an overhauled interior and technology from the uber-luxurious S-Class, so there’s a lot to like about the new car.

Ok, so the design of the Mercedes C-Class may look like it was drawn up three minutes before home-time on Christmas Eve, but there are changes compared with the older car. Promise.

At the front, the headlights are slightly thinner than before and there’s a new downturned grille that makes it look a bit like it’s scowling at you. In AMG Line trim, that grille is even made up of tiny Mercedes logos — in case the giant three-pointed star smack in the middle wasn’t enough…

Down the side, there are fewer creases on the doors and some new alloy wheels too, ranging from 17- to 19-inches in size.

Check out the best saloon cars on sale

Things are a little more drastic at the back of the Mercedes C-Class. Rounded tail lights have been ditched in favour of slimmer, pointy units that are similar to those found on the smaller A-Class saloon and CLS, though the black diffuser looks pretty similar to the old car. Chrome exhaust tips feature at the back too, but you can put money on them being fake.

If the Mercedes C-Class’ exterior was a design effort crafted at 4:59 pm on a Friday, the interior must’ve taken the remainder of the year’s shifts. It’s completely new and takes plenty of inspiration from the larger super-luxurious S-Class.

Get more info on the Mercedes S-Class

The sweeping dashboard design feeds into the centre console to create a cockpit-like effect. Smack bang in the middle of the two seats is a huge infotainment system (more on that soon) while a digital driver’s display comes as standard.

There’s more to the Mercedes C-Class’ interior overhaul than just looking sharper, it’s even a bit roomier too. There’s 13mm more headroom in the back, along with 35mm more knee room. The boot in the saloon has been increased in size by 45 litres to 360 litres as well, and if you need more space, the new Mercedes C-Class Estate comes with 490 litres of usable space with the back seats in place.

That’s 30 litres more than you could fit in the old C-Class Estate, but five litres shy of what an Audi A4 Avant will carry. Flip the back seats down and there’ll be space for 1,510 litres of luggage, though. Which is 15 litres more than the Audi can manage.

The old Mercedes C-Class felt like its infotainment system was slapped on the dashboard as an afterthought — but that’s not the case here. A 10-inch portrait screen is integrated into the centre console as standard, though you can choose to upgrade it to 12-inches if you wish.

As well as your usual gubbins here — navigation, music, smartphone mirroring — you also control almost all of the car’s non-driving functions through the system.

Both this and the digital driver’s display (10-inch as standard or 12-inch optionally) run Mercedes’ MBUX system which supports a personal assistant that works through voice control — a bit like Alexa or Google Assistant. It’ll even connect to your home devices, meaning you can ask the car to turn your central heating on before you even reach your driveway.

Much of the technology in the Mercedes C-Class has been filtered down from the range-topping S-Class, so there’s a lot to melt your mouth if you’re a tech geek.

The main highlight here is a semi-autonomous driving system that can accelerate, brake and steer the car for you — up to speeds of 130mph (ideal for the Autobahn, just don’t test that on the M62).

It works with a 360-degree camera system to spot road signs and adjust your speed automatically to suit any change in limits too, and even help you steer around broken-down cars you may not have spotted while travelling at speeds of up to 60mph.

The adaptive cruise system also works on a variety of roads, including around town to make stop-start traffic a little less stressful. There’s an optional ‘digital light’ system on the C-Class too, which is able to project warning signals on the road ahead of you.

A range of four-cylinder engines will be available at the launch of the new Mercedes C-Class, in petrol, diesel and plug-in hybrid guises. All cars get a nine-speed automatic gearbox as standard, too.

Every one of the engines in the new Mercedes C-Class features a mild-hybrid system as standard, which gives a small boost when you accelerate and helps improve fuel economy, though a full-fat plug-in hybrid will be available for those wanting to do a little more electric driving.

Dubbed the C300e, this version of the C-Class links a 204hp petrol engine to a 129hp electric motor. The latter element is powered by a 25.4kWh battery pack and allows the car to be driven on electric-only mode for around 60 miles between charges.

No official word yet on high-performance AMG versions of the Mercedes C-Class, but they’re inbound with four-cylinder plug-in hybrid engines instead of the old V6 and V8 options. Don’t be too down about that, though, as they’re likely to be much more powerful.

Normal steel springs come as standard on the Mercedes C-Class, but you can upgrade these to an adaptive air suspension system that’ll allow you to make the car more comfortable or sportier driving depending on your mood. Plug-in hybrid cars will get this as standard on the rear axle.

No official word in pricing for the new Mercedes C-Class yet but you should expect it to start at around £38,000 for a saloon and £39,000 for an estate model.

Deliveries will begin towards the back end of 2021.

Can’t wait for the new Mercedes C-Class? Check out the latest offers on the current model, or find another car to suit you