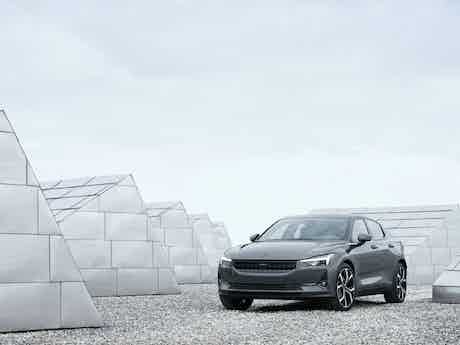 Full prices and specs have been revealed for the new Polestar 2 electric car – including info on an optional Performance Pack. Read on for all the latest on the car’s price, specs and release date.

The latest information for Polestar is that its Polestar 2 electric car will be available with a Performance Pack that’ll cost £5,000 in the UK. According to Polestar, it’ll take the car’s dynamics to the “next level” although performance remains the same with 300kW on tap or about 400hp in old money. What the pack does bring is four-pot front brake calipers from experts in the field, Brembo, dampers from suspension experts Öhlins and a set of lightweight 20-inch forged alloy wheels. To those upgrades, you can add, somewhat less subtle, gold-coloured seat belts and gold dust caps.

Keep reading for all the latest on the new Polestar 2.

The Polestar 2 electric car will cost from £50,000 and will go into production early next year with the first cars being delivered to their owners in June 2020. That means the Polestar 2 is £10,000 more than the Tesla Model 3 and £15,000 less than a Mercedes EQC.

There are two good reasons the Polestar will cost about the same as a high-end BMW 3 Series. The first is performance. It’ll be powered by two electric motors – one on each axle, making it four-wheel-drive – that pump out nearly 400hp combined to get it from 0-62mph in under five seconds. Its 78kWh battery should be good for a range of around 275 miles.

The other reason for the Polestar’s substantial price tag is that launch models will come in an extremely high specification. For a kick-off, Pilot Assist comes as standard, so the Polestar will be able to accelerate, brake and steer itself. Even if you try and pull out in front of a car in your blindspot, the Polestar 2 will steer you back into lane and it will also safely bring the car to stop if you fall asleep behind the wheel and stray off the road.

Along with autonomous driving being a must if you’re going to go head-to-head with Tesla, you’ll also need a unique infotainment system. In the Polestar 2’s case, its the first car to get Android Automotive  – so it runs Google Assistant (Google’s extremely reliable voice-activation system) and Google maps and gets features such as phone-as-key. So you can use your smartphone as a key to your car.

More conventional luxuries fitted as standard include a full-length panoramic sunroof and a Harman Kardon stereo. But you also get LED lights that dance like an Audi’s when you lock and unlock the car, headlight washers, heated windscreen wipers, heated seats and a heated steering wheel, electrically adjustable front seats and wireless charging for your mobile phone.

Polestar calls the 2 a fastback – sexy, eh? In reality it’s a five-door, so has front and rear doors each side as well as hatchback-style boot at the back.

It is sleek, though, starting with its purposeful face. There’s more than hint of Volvo about the place, what with those Thor-hammer LED daytime running lights, but the unique grille, bonnet lines and trademark frameless door mirrors do enough to set it apart. The illuminated Polestar badge should help, too.

Squint, and you’d be forgiven for thinking you’re looking at a Volvo V60 around the back, but again, Polestar has set its 2 apart by running a rear LED daytime running light the full width of the car, then curling it up in each corner around the car’s tail lights. Adding Polestar’s Performance Pack brings huge forged 20-inch alloy wheels, gold seatbelts, brake calipers and valve caps as well as ‘performance visuals’. Yum.

Inside the similarities with Volvo continue. The steering wheel? Polestar badge aside, it’s from a Volvo. The front seats? Yep, those are from a Volvo too. The vents? The door handles? You get the idea. None of this is a bad thing, though, as Volvo makes some superb interiors in terms of quality, while its seats are often some of the comfiest and most adjustable around.

What certainly isn’t from a Volvo is that centrally-mounted infotainment touch screen. It’s 11 inches in size and runs entirely on Google’s Android operating system – the first in the world to do so, claims Polestar. Polestar also claims its interiors are ‘vegan’, with ‘progressive textiles that will appeal to a forward thinking audience.’ We’ll leave that one with you.

Apart from being more familiar to smartphone users, the biggest benefit of the system running on Android is updates – while most car infotainment systems are very difficult to update over their lifetimes, the Polestar’s system will be as easy to update as your smartphone or tablet at home.

Other highlights include Google Maps-based sat-nav, phone-as-key tech which can sense you approaching the car and easier car sharing and connected services such as pick-up and delivery of your car for maintenance. Also, via the car or your mobile, you’ll have access to the most up-to-date charging infrastructure information. Alongside the 11-inch central screen will be a configurable digital instrument cluster that displays key informations such as speed, battery life and charging times.

There aren’t any, but that’s sort of the point. Instead the 2 has a 78kWh battery pack paired with electric motors and all-wheel drive. In total the Polestar 2 produces 408hp for punchy performance, but drive it sensibly and Polestar reckons a 500km or 310-mile range should be possible. Any guesses as to the maximum range of a Tesla Model 3? You got it – 310 miles. We don’t yet have any more information of charging times, but expect it to take a very long time via domestic three-pin plug, but for a DC fast-charge option to be available. There won’t, however, be a dedicated charging network like the one Tesla offers.

Final performance figures are yet to be published for the 2, but Polestar says it’ll crack 0-62mph in less than five seconds. That’s somewhere in the middle when compared with the fastest and slowest versions of the Tesla Model 3. As mentioned, Polestar sees itself as a performance brand, so its 2 has been designed to be fun to drive. It’s battery pack, for instance, is integrated into its floor for a lower centre of gravity and therefore less body lean in corners. The batteries also contribute to the car’s rigidity for better agility. For those who want to make the 2 even sharper to drive, adding the Performance Pack brings sportier suspension, upgraded brakes and those 20-inch alloy wheels for even more grip, poise and ultimately, fun.

Get updates on the 2020 Polestar 2 – and hundreds of other cars – by signing up to the carwow newsletter.