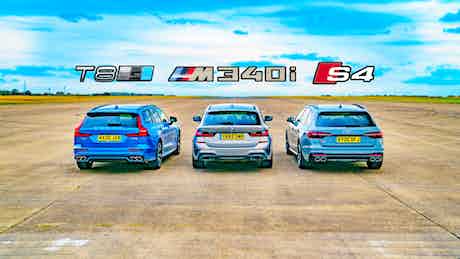 If someone says ‘fast estate car’, you probably think of something big, brash and probably built in Germany. Our latest drag race lines up two cars that fit that bill perfectly – the BMW M340i Touring and Audi S4 Avant – but we’ve also lined up a sensible, but speedy, Swede-built Volvo V60 T8.

First up, let’s talk about the left-field choice – the Volvo V60 T8. It’s powered by a complicated mix of turbocharged and supercharged 2.0-litre petrol engine and a rear-mounted electric motor. Who said the simplest ways are always the best eh?

Overall, this hybrid setup produces 387hp and 640Nm of torque, neither of which is to be sniffed at. Shame there’s no launch control, though, and the Volvo’s eight-speed automatic gearbox isn’t the slickest in the business.

That’s not a complaint you can level at the BMW M340i Touring’s exceptional eight-speed automatic gearbox. It’s one of the best around, as is its 3.0-litre straight-six petrol engine with 374hp. Sure, its 500Nm of torque is 140Nm less than you get in the Volvo, but the four-wheel-drive M340i gets a sure-fire launch control system that’ll make it lightning-fast from the get-go.

Finally, we come to the Audi S4 Avant. And, being the latest S4, it comes with a 3.0-litre V6 diesel engine with 347hp. That makes it the least powerful car here, but its whopping 700Nm torque figure easily tops the other two estates.

It also has an eight-speed automatic gearbox and four-wheel drive, but the Audi S4 Avant’s middle-of-the-road launch control system is far from the quickest off the line.

Which of these fast, yet practical, all-rounders will come out on top? Will it be the hybrid Volvo, the petrol BMW or the diesel Audi? Watch the race to find out.