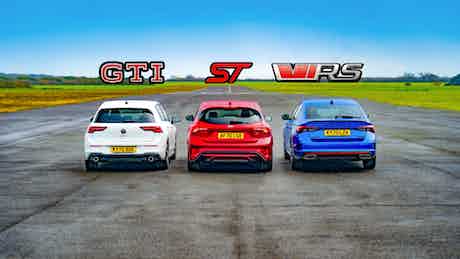 What happens when you pit three very capable front-wheel-drive hot hatches against each other in a drag race? We’ve lined up the new VW Golf GTI, a Ford Focus ST and the new Skoda Octavia vRS to find out.

Let’s start with the Volkswagen Golf GTI. Arguably, it started the hot hatch craze and has always been a solid all-rounder. Under the new car’s bonnet is 245hp turbocharged 2.0-litre four-cylinder engine, which produces 370Nm of torque. Our car has a seven-speed DSG automatic gearbox, but a 6-speed manual is also available.

The Golf is the lightest of the three cars in this drag race weighing in at 1,463kg, but it’s also the most expensive. It will set you back £34,960.

Next up is the Ford Focus ST. It’s hard to believe it was almost twenty years ago when the first ST was launched. The current ST is the quickest hot hatch Ford currently sells and it’s one of the most practical fast family cars around. It comes equipped with a 2.3-litre turbocharged petrol engine that produces 280hp and 420Nm of torque.

It will reach 0-60mph in less than six seconds and comes with a clever limited-slip differential to help maximise grip when you accelerate hard out of sharp corners. The Focus ST is the heaviest of the three cars, tipping the scales at 1534kg but it’s slightly cheaper than the GTI – priced at £34,710.

The final car in this three-way drag race is the Skoda Octavia vRS hatchback. Even though it’s the largest and roomiest of the three cars featured, it weighs less than the Focus, coming in at 1520kg. It’s powered by the same engine and gearbox set up as the Golf GTI so power stats are identical. It has a 2.0-litre four-cylinder engine with 245hp with 370Nm of torque and a seven-speed DSG automatic gearbox.

On paper, the Octavia gives the most bang for your buck beacause it’s priced at a very reasonable £31,495 – the cheapest of three cars featured.

In summary, we have three very capable family cars that offer spades of practicality and impressive performance stats but which one will be first to cross the line in a drag race?