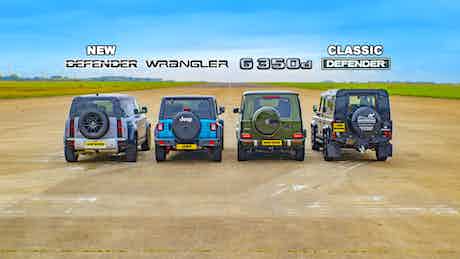 When you’ve tested the latest hardcore off-roaders in the dirt, what’s the next sensible step? What about a drag race? Well, that’s exactly what Mat has in store for the new Land Rover Defender, its classic predecessor, a Jeep Wrangler and a Mercedes G-Class.

Tap the video to watch the race:

The latest Land Rover Defender is packed with more tech than ever before, but none of its gizmos is designed to help it win a quarter-mile drag race… Instead, it’ll have to rely on the 240hp and 430Nm of torque from its 2.0-litre turbo-diesel engine.

This car costs a smidge more than £56,000, which is enough to buy you four-wheel drive and an eight-speed automatic gearbox, but not launch control (though, are you surprised?) The new Defender’s hefty 2.4-tonne mass means it’s unlikely to get a speedy getaway, either.

Next up is the positively featherweight Jeep Wrangler. This Rubicon model is the only car in this lineup that weighs less than 2 tonnes (though only just.) It sports a 2.0-litre petrol engine with 272hp and 400Nm of torque.

Check out our Jeep Wrangler review

It too gets an eight-speed automatic gearbox and four-wheel drive. But it only sets you back around £45,000.

By comparison, the Mercedes G-Class G350d costs more than £96,000 – that’s double the price of the jeep. It does come with the largest engine here, though – a 2.9-litre straight-six diesel unit with 286hp and 600Nm of torque – and a nine-speed gearbox, four-wheel drive and three locking differentials.

That said, it’s also the heaviest car in our lineup, tipping the scales at a whopping 2.5 tonnes.

Finally, we come to the curveball competitor – a classic Land Rover Defender 110. This old-school off-roader gets a 2.2-litre diesel engine with just 122hp.  It does produce a relatively healthy 360Nm of torque, though, and it’s around 300kg lighter than the new Defender.

Its six-speed manual gearbox and four-wheel drive could make it tricky to launch, however, and likely won’t do it any favours in the rolling race, either.

It’s safe to say that every car here is some distance from its comfort zone, but which will make the move from mud to quarter-mile the best? Watch the race to find out.