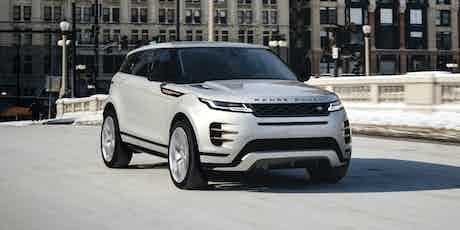 With its smart styling, upmarket interior and big boot, the Range Rover Evoque was already an appealing upmarket small SUV. Now, Land Rover says it’s made the Evoque even better, thanks to an array of tweaks to the engines, in-car tech and a revised top-spec trim level.

The Evoque is still a fairly new car, so the design has been left pretty much untouched in this refresh. The only cosmetic changes in this update come in the form of a new top-of-the-range Autobiography trim, which adds features like a gloss black grille, new ultra-bright Matrix LED headlights and copper finishes on the side vents and exhaust pipes.

Land Rover hasn’t modified the interior much, either. Perhaps the most obvious tweak is the new touchscreen display on the centre console, which uses the same Pivi software used in models like the new Land Rover Defender.

As with the exterior, the Autobiography spec brings a few more additions to the Evoque’s cabin. This top-of-the-range version comes with a bit more leather trim on the instrument panel and steering wheel, as well as an extra touchscreen in the centre console and a fully digital instrument display.

The updated touchscreen isn’t the only gadget that’s been added to the Range Rover Evoque’s spec sheet. New features on the 2021 model year car include a new air filtration system that Land Rover claims can purify the air inside the cabin, as well as convenience tech such as wireless phone recharging.

A few more driver assists are now available on the Evoque, too, including a new rear collision alert warning system and Land Rover’s 3D surround camera setup that can give you a better idea of what the wheels are doing when you’re driving along a tricky off-road course. Although you’ll probably use it to make sure you don’t damage your car’s wheels when parking.

The Range Rover Evoque’s petrol engines have already been given the hybrid treatment, and now it’s the turn of the diesel engines to be electrified. In this case, the existing car’s 165hp and 200hp 2.0-litre diesel engines have been given a bit of extra assistance from a small electric motor. This means they won’t be able to cover any electric-only miles, but they should be a bit more fuel-efficient than the old versions.

All of the petrol engines that were already available for the Evoque have been carried over unchanged, too. Therefore, if diesel power doesn’t float your boat, you’ll be able to instead pick a 2.0-litre petrol engine with either 200hp, 249hp or 300hp. Also available is a plug-in hybrid setup with up to 309hp and up to 40 miles of electric-only range.

The updated Range Rover Evoque is available to order now, with prices starting from £32,100.