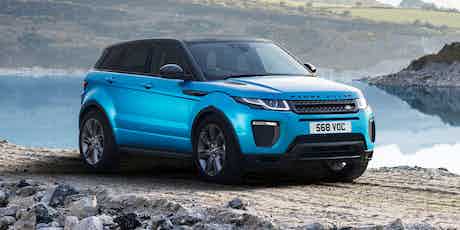 Land Rover has released a special Landmark edition Range Rover Evoque to celebrate six years and more than 600,000 sales of its smallest SUV. This compact off-roader comes with a number of visual modifications to help it stand out from cheaper models including 19-inch alloy wheels and optional Moraine Blue paint – pictured here.

Besides the neon paintjob – more discrete Yulong White and Corris Grey versions are available – this special edition Evoque comes fitted with subtle grey trim pieces on the grille, bootlid and bonnet. Inside you’ll find a similar brushed metal finish on the centre console and dashboard and a panoramic glass roof as standard, too.

Moody black leather seats with contrasting stitching are joined by the same eight-inch touchscreen infotainment system as the standard car. You can, however, upgrade to a larger 10-inch unit and a Touch Pro package. The latter offers improved sat-nav features – including a street level display – and a WiFi hotspot while a dedicated app for your smartphone is also available that’ll let you see how much fuel is left in your car without leaving the sofa.

The Evoque Landmark Edition comes as standard with a 180hp 2.0-litre diesel engine, a manual gearbox and four-wheel drive. As a result, it’s expected to return almost identical performance and economy figures to the existing TD4 model. Manual versions will probably return a claimed 58.9mpg while automatic cars will have to make do with a claimed 55.4mpg.

When it goes on sale on 10 May 2017, entry-level Evoque Landmark models will cost from £39,000 – that’s almost £6,000 more than a standard TD4 model with the same engine, gearbox and four-wheel-drive system. Pick an automatic version and you’ll have to hand over approximately £2,000 more.