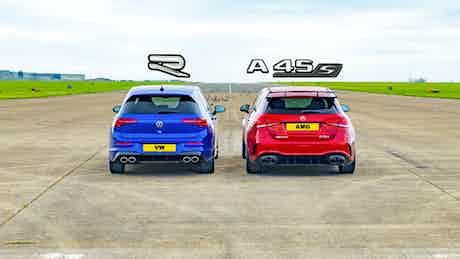 It seems as though the latest Volkswagen Golf R is completely unstoppable in the hot hatch stakes.

When it first took on the gruelling carwow drag race test against a variety of stiff German competition, it walked the floor with the BMW M135i, Audi S3 and Mercedes-AMG A35.

Then in a race against the Honda Civic Type R (arguably the best hot hatch on sale today) it left the winged Japanese behemoth whimpering behind.

Surely then, it’s now proven itself as the ultimate drag race hot hatch? Well, there’s one more task to take on — and it’s the toughest yet.

As mentioned, it’s already beaten the Mercedes-AMG A35, but can it do it against the no-holds-barred version, the A45 S? Well, today’s drag race looks to answer that.

In isolation, the Volkswagen Golf R’s stats are seriously impressive. Its 2.0-litre turbocharged four-cylinder engine officially kicks out 320hp and 420Nm to all four wheels through a seven-speed DSG automatic — but it feels like there’s so much more than that under your right foot.

On paper though, it’s trounced by the Mercedes-AMG A45 S. This is powered by the most powerful series-production four-cylinder engine ever — a 2.0-litre turbocharged unit churning out 421hp and 500Nm, also sent to all four wheels, though through an eight-speed dual-clutch automatic.

So then, it looks as though the Volkswagen Golf R may have finally met its match. Or has it? You’ll have to watch to find out…