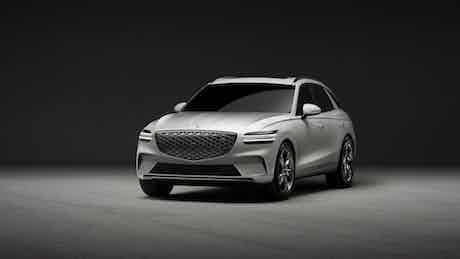 Genesis has revealed an all-electric version of the GV70 luxury SUV. Read on for all you need to know.

The new electric version of the Genesis GV70 SUV has been revealed with more than 300 miles of range.

This alternative to the Tesla Model Y and Audi Q4 e-Tron also has 480hp and is only available with all-wheel drive.

The new electric Genesis GV70 will be available with all-wheel-drive only, meaning it has dual motors. It has 480hp and 700nm of torque, which pushes it from 0-60mph in 4.2 seconds.

This new electric SUV will support vehicle-to-load charging, just like the Hyundai Ioniq 5. This means you can run some household appliances, such as a kettle, by plugging them into the car.

The new electric version of the Genesis GV70 shares the same design as the petrol and diesel models.

This means it gets the same split headlights and distinctive grille design. Around the back, it has the same sloping roof line and LED rear lights.

Inside, it’s also familiar to anyone who’s spent time in the standard GV70, the only difference being the use of a new three-spoke steering wheel.

The new electric Genesis GV70 has only been revealed for the Chinese market so far, so it’s not confirmed when it will be coming to the UK. You may see an official reveal in early 2022.

Pricing also hasn’t been confirmed yet, however you can expect it to be more than the standard car’s £39,450 figure. Somewhere closer to £35,000 is a safe bet.