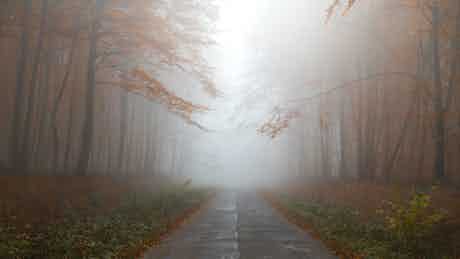 Driving in fog can be an unnerving experience for any motorist. Your visibility is compromised heavily – especially at night – and you need to be especially vigilant, which can be especially tiring on long journeys.

Handily, there are a number of features on your car that can make it safer and easier for you to drive in foggy conditions. Combine those with the handy tips we’ve detailed below, and you can become a safer and more confident driver the next time you find yourself driving through a patch of fog.

Read on for all of our tips to keep you safe when you’re driving in fog.

Tip 1: Turn on your fog lights

One of the best ways to stay safe when driving in fog is to turn on your car’s fog lights, which will help make your car more visible to other road users. All modern cars have at least one rear fog light, and many cars have front fog lights nowadays, too.

The controls for your car’s fog lights will usually be on the dashboard, though some will instead have them located somewhere else such as one of the stalks behind the steering wheel. Check your car’s owner’s manual to find where the fog light switches are – and remember to turn your fog lights off when you’re no longer in fog!

It goes without saying that, when your visibility is compromised by fog, you shouldn’t drive at the same speeds you normally travel at on a clear and dry day. This is especially the case on faster roads such as dual carriageways and motorways, since the faster speeds give you less time to react to an obstruction ahead.

When you do reduce your speed, make sure you do so gradually rather than suddenly. This will reduce the chances of the driver behind colliding with you.

Tip 3: Leave a distance to the car ahead

This tip goes in tandem with the speed reducing advice from earlier. Leaving a larger distance to the car ahead will give you more time to react to a sudden hazard ahead – especially if the fog is so thick you can only make out the car’s lights.

As a rule of thumb, try to keep a four-second gap to the car ahead, like you would if there was heavy rain and your view was being obscured by the spray from a car ahead. Try to adhere to this even if you can clearly see the car ahead in the fog, since there may be an obstruction further down the road that you aren’t aware of.

Tip 4: Turn on your headlights

Even on cars that have front fog lights, there’s no harm in turning on your car’s headlights, too. After all, anything that makes your car more visible to other road users is very useful when your view out is shrouded in fog.

As tempting as it may be, keep your headlights dipped rather than on full beam. This will not only reduce the chances of the drivers ahead or oncoming traffic being dazzled by your headlights, but the lights from your headlights may actually end up being reflected back to you in very thick fog.

The fog cloud itself isn’t the only thing that can limit your visibility. Water may build up on your windscreen due to all the vapour in the air, and the lower temperatures can cause condensation to build up on the inside of your car’s windows, too.

It’s best to keep your wipers and your heating or air-con running when you’re driving through fog, since it will make it much easier to see out of your car.

Tip 6: Keep an ear out for traffic

With the fog already making it harder to see, you don’t want any additional distractions. Since your sense of sight will be compromised in fog, it’s best you also keep an ear out for other road users – especially in instances where you’re joining roads at junctions or motorway slip roads.

If it helps make it easier for you to hear other cars, you may want to wind your window down a little bit. We’d also recommend not having the radio on for the same reason.

When it’s foggy, it’s best to keep at a reduced and steady pace until the conditions start improving. As a result, we’d recommend you stay in your lane on the road and not overtake any traffic that’s ahead of you.

The only exception to this would be if you absolutely need to pull out from behind the car in the first place. For instance, you may be on the motorway and need to change the lane you’re in depending on where you’re travelling to.

Tip 8: Be prepared to stop

The limited view of the road ahead not only means you should reduce your speed. You should also be prepared to slow down even more and maybe even bring your car to a stop.

This is because the fog could shroud obstacles and other blockages ahead that may bring you to a standstill.

It’s imperative that you drive safely at all times, and especially so when there’s fog blocking your view. This means that the speed reductions we recommend will inevitably have an impact on your journey time.

If there’s a weather forecast that warns of oncoming fog, you may be able to mitigate this by either taking a different route or setting off on your journey a little earlier. Otherwise, you’ll need to accept you may not make it to your destination on time – it’s far more important that you get there safely and in one piece.

You may not just have fog to contend with when you’re out on the road. If it’s especially cold, you may also have ice to contend with, as the moisture in the air can form a damp road surface which may freeze when the temperature plummets.

The best cars for snow

As a result, if you’re driving in fog when there’s ice on the road, make sure your inputs are measured and calm – don’t slam on the brakes, for instance, as you may lose control of your car.

What should you avoid when driving in fog?

What should I check when driving in fog?

You should regularly check your fog lights and headlights to make sure these are in full working order, regardless of whether there’s fog on the way or not. You’ll want to make sure nothing is obscuring the lights, either, so keep them clean and de-ice them, if necessary, when the temperature drops.

What should I do when there’s dense fog?

While you may be able to use objects like roadside barriers and cats eye reflectors in the road as a guide in very thick fog, It’s advisable to pull over safely where possible until the fog clears. As we mentioned earlier, it’s far more important that you get to where you’re going safely rather than adhering to a time schedule.

How do I turn on my fog lights?

There isn’t a standardised control scheme for fog lights in cars, so this varies between makes and models. In most cases, you’ll either need to press a button or turn a dial on the dashboard, or turn a toggle on one of the stalks behind the steering wheel. Your car’s owner’s manual will explain what you’ll need to do to turn the fog lights on and off.

How fast should I drive in the fog?

This will depend on factors such as how dense the fog is and the speed limit of the road you’re travelling on. You should ideally drive at a slower speed than you usually would, in order to give yourself more time to react to unexpected hazards, though as long as you’re not driving too slowly for the road you’re on, stick to a steady speed that you’re comfortable travelling at in the conditions.