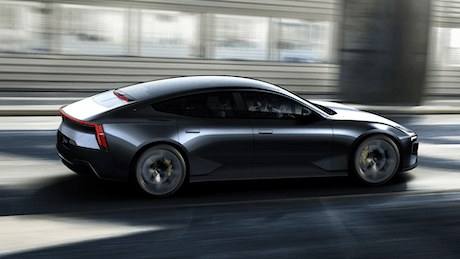 The stunning Polestar Precept will hit the roads as the Polestar 5 in 2024. Read on for full details on this brand-new electric car.

Remember the Polestar Precept concept? Well, it’s becoming a reality, with the Polestar 5 confirmed to arrive in 2024.

This luxury electric saloon will go up against alternatives such as the Audi e-tron GT and Tesla Model S when it comes to market.

This teaser image is your first official look at the Polestar 5.

Compare it with the rear of the Polestar Precept (below), and you’ll rightly notice it looks very similar — albeit with some smoother lines.

You can expect the front end to look very much the same as the Precept, too.

In fact, peer closely at the front of Polestar’s teaser picture and you can just about spot a set of split headlights – just like the Precept concept.

The Polestar 5 could be a rare case of a concept car’s interior (pictured) carrying over to production largely unchanged.

This could mean the finished road car comes with a button-free dashboard, with key functions housed within the central infotainment system and a neatly-placed digital driver’s display.

It’s likely the Polestar 5 will come with five seats rather than the Precept concept’s four, although the option of a more luxurious layout with two wider, more comfortable back seats may be on the cards.

There’s been no word yet on what kind of electric setup the Polestar 5 will have but, as the most expensive car in the brand’s lineup, it’ll no doubt improve on the entry-level Polestar 2’s 273 miles of range.

Polestar CEO Thomas Ingenlath has previously suggested the maximum range could be capped at about 310 miles, though the tradeoff of this would be a lighter battery and thus better performance.

A dual-motor setup is likely to be on offer, and Polestar may even push the boat out with a tri-motor system.

Check out the latest Polestar offers with carwow or compare the best electric cars on sale now.