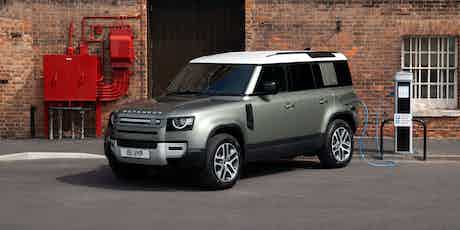 The new Land Rover Defender has been updated with new plug-in hybrid and six-cylinder diesel engines. Read on for more details.

The Land Rover Defender will soon be available with a range of new diesel and plug-in hybrid engines, as well as in commercial Hard Top specification.

You’ll soon be able to get the new Land Rover Defender as a plug-in hybrid model called the P400e. This model pairs a 300hp 2.0-litre four-cylinder petrol engine and a 141hp electric motor to produce a combined 404hp.

Its 19.2kWh battery takes 30 minutes to charge from empty to 80% full using a 50kW public fast-charger. With a full battery, you can drive for around 27 miles in electric-only mode. With the motor and engine working together, the Defender P400e can do 0-60mph in 5.4 seconds and return a claimed 85.3mpg – very impressive for a high-riding off-roader.

This new Land Rover Defender P400e is available with five or six seats and comes with adaptive air suspension and three-zone climate control as standard. It can tow a trailer weighing up to 3 tons.

Land Rover hasn’t announced how much the new P400e hybrid will cost, but the current Defender in non-hybrid P400 guise will set you back more than £70,000, so don’t expect it to be cheap.

You’ll also be able to get the new Land Rover Defender with a trio of six-cylinder diesel engines. These come in D200, D250 (which replaces the old D240 engine) and D300 flavours, producing 200hp, 249hp and 300hp respectively.

All three use 48-volt mild-hybrid systems that use a small electric motor to give the engine a boost when you accelerate and help reduce fuel consumption when you’re cruising along. Land Rover claims the D200 and D250 models will return 32.2mpg.

The new-for-2021 X-Dynamic pack adds front and rear skid plates, black mirror caps and extra protective sill cladding. Inside, you get metal treadplates and seats trimmed in a combination of leather and Land Rover’s own ‘Robustec’ fabric that’s supposedly inspired by hard-wearing clothing made for outdoors-ey types.

Land Rover has also launched the Defender Hard Top – a commercial version of the 90 and 110 Defenders that ditch all but the front seats to maximise load space. The 90 versions can carry up to 1,355 litres of luggage while the 110 can cope with 2,059 litres weighing up to 800kg.

Check out the latest Land Rover Defender deals or compare the latest carwow offers on the best 4×4 cars.