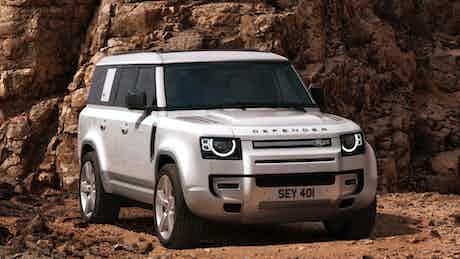 The new Land Rover Defender 130 is on sale now. It’s an extended wheelbase, eight-seater version of the 110 Defender, keep reading for all you need to know about it.

The new Land Rover Defender 130 is on sale now. This alternative to the Mercedes G-Class and Toyota Land Cruiser offers the most passenger and load space of any Defender model.

It’s inside where you’ll notice the biggest changes to the Land Rover Defender 130, as it can seat up to eight people.

If you only need to carry five people but a lot of stuff, the rearmost row can be folded down to create a vast cargo area with 1,232 litres of space.

To keep all of your passengers comfortable, four-zone climate control is available as an option. A standard-fit panoramic glass roof keeps the cabin light and airy.

An 11.4-inch touchscreen comes as standard featuring Apple CarPlay and Android Auto, as well as What3words integration. This is a service which allows you to pinpoint a 3m x 3m square anywhere in the world using a unique three-word address.

There are no shocks in terms of design with the new Land Rover Defender 130, as it looks a lot like a normal 110 model but longer.

It’s 340mm longer to be specific, however the car retains the boxy shape and angular design you’d expect from a defender.

The side profile is where you notice the biggest difference, as the rear overhang is much larger than on other models. You also get black roof rails fitted as standard, along with 20-inch alloy wheels.

The 130 is available in an exclusive colour called Sedona red, and you can opt for an extended bright pack featuring satin silver detailing around the bonnet and lower body panels.

The new Land Rover Defender 130 is available with three different engines, two petrols and one diesel. All are six-cylinder units and all have mild-hybrid assistance; there’s no V8 option like you get with other Defenders.

As with all Defenders, the 130 is only available with an eight-speed automatic gearbox. All 130 models get air suspension as standard, along with Land Rovers Terrain Response system to make it more or less unstoppable off-road.

The first edition model gets Matrix LED headlamps, heated second and third-row seating, an upgraded Meridian sound system and privacy glass. This will cost from £82,610.