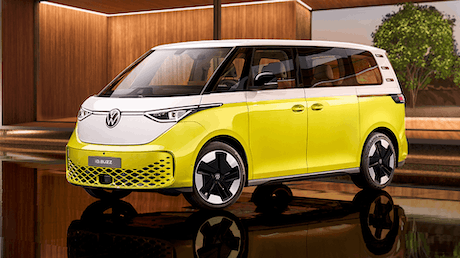 This is the long-awaited VW ID Buzz — a retro-inspired electric MPV. Read on for full details.

After years of concepts and teasers, the Volkswagen ID Buzz has at last been revealed.

This retro-inspired electric MPV will go on sale later in 2022 as a five-seat model with more versions, including a commercial vehicle, to follow in 2023.

If you have a hankering for a modern Volkswagen Type 2, the VW ID Buzz should tickle that fancy.

Its two-tone paint finish is unashamedly inspired by the classic van, and it draws more styling cues too.

Take the large badge at the front for example, albeit with sleek LEDs flanking it for a modern touch.

You’ll also spot some straked detailing towards the rear which serves as a subtle nod to the old Volkswagen T2. A sliding door also appears on the VW ID Buzz for practical access to the rear seats.

18-inch alloy wheels come as standard on the MPV, but you’ll be able to opt for up to 21-inch units if you’d prefer.

Despite its remarkably retro exterior, the interior of the Volkswagen ID Buzz is about as modern as it gets.

Coloured accenting brings some character into the cabin, and you’ll spot an insert across the dashboard for even more style. It’s wood here, but you’ll have several options to pick from.

A 5.3-inch digital driver’s display comes as standard and offers you key driving information such as current speed and range remaining. It looks similar to the one you get in a Volkswagen ID3 and ID4.

Sitting in the centre of the dashboard is a 10-inch infotainment system, which can be upgraded to a larger and more advanced 12-inch version.

As standard, the VW ID Buzz will be a five-seater. Longer-wheelbase six- and seven-seat variants are due to follow in 2023.

With all five seats in place, the ID Buzz will give you 1,121 litres of boot space.

Powering the VW ID Buzz is a single electric motor producing 204hp and 310Nm of torque, which drives the rear wheels.

A 77kWh battery will be fitted too, with support for 170kW rapid charging. VW has yet to officially confirm range and charging speeds, though it’s expected to have around 250 miles of range.

The VW ID Buzz will go on sale later in 2022, with an LCV (commercial) version launching alongside the passenger model.

Expect to hear official pricing sometime over the summer, though it’s likely to cost more than the recently-revealed VW T7 Multivan. That’s available from around £43,000.

Looking towards Volkswagen for your next car? Check out the latest deals on the brand’s cars