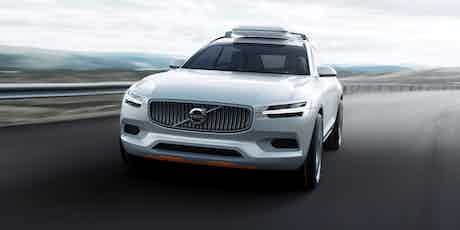 Volvo’s trademarked the XC50 name for a new coupe SUV version of its practical XC60 family car. This new model will be a stylish Swedish alternative to the likes of the BMW X4 and Mercedes GLC Coupe when it goes on sale in 2020.

Before this new model hits showrooms, see how much you can save on the current Volvo range by heading over to our deals pages. Click ‘login’ in the top-right-hand corner to sign in and configure a brand-new car, or browse our extensive range of pre-reg, ex-demo, new, nearly new and used in-stock cars

The new car’s styling is expected to draw inspiration from the recent Volvo XC concept (shown above) including its sleek ‘Thor’s Hammer’ headlights, sloping roofline and sporty bumpers. The hook-shaped brake lights could reach production on the XC50 too, but the tall square exhausts peeking out through the rear bumper will probably be replaced by a pair of more conventional items.

The concept’s hidden door handles probably won’t reach showrooms either, and the finished XC50 will almost certainly come with four doors instead of the concept’s two to make it easier to live with.

The XC Concept’s radical interior will also be toned down for production. Its four-seat layout will certainly be changed to accommodate a driver and four passengers while its rear bucket seats will be swapped out for a more practical three-seat bench.

You’ll get a similar eight-inch portrait touchscreen infotainment system in the XC50 as in the XC60 and XC90 alongside a digital driver’s display in place of conventional analogue dials. There’ll also be plenty of plush leather, soft plastics and unpolished wood trims alongside some sportier and more supportive front seats.

Sadly, the XC50’s sloping roofline will cut into boot space, so it won’t be quite as practical as the XC60. It’ll still be roomy enough for a few large suitcases, though.

Just like the XC60, the new XC50 will come with a range of petrol, diesel and hybrid engine options, from an entry-level D4 diesel to a high-performance T8 hybrid model. Only the D4 and D5 diesels will be offered with a manual gearbox – all other models will come with a smooth eight-speed automatic as standard.

Top-spec T8 hybrids (that Volvo calls Twin Engine models) will be the fastest XC50s. They come with a 2.0-litre petrol engine paired with an electric motor to deliver around 390hp. Combine this with a grippy four-wheel-drive system and they’ll crack the 0-62mph sprint in close to five seconds.

Volvo hasn’t released any official details about when the XC50 could go on sale but it’s expected to make its public debut in 2020 and appear in showrooms soon after. It’s expected to cost slightly more across the range than its more practical XC60 sibling so you may have to fork out at least £40,000 get your hands on one.