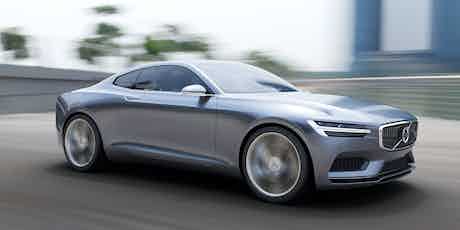 A coupe version of Volvo’s S90 saloon is thought to be on its way. The new model – possibly called the C90 – will gain a sporty, swoopy roof

Volvo is in the middle of a radical overhaul of its entire range and rumours suggest it might produce a luxury coupe. The new model will be based on the S90 and possibly named C90. It’ll probably sit somewhere between a Mercedes E-Class Coupe and S-Class Coupe in terms of size when it hits showrooms towards the end of the decade.

We’ve already seen clues to what the new model might look like. Volvo revealed the Concept Coupe back in 2013 – shown throughout – a car that’s inspired every new entrant to the Swedish brand’s range. However, as a two-door alternative to the S90 saloon, the new coupe will probably be longer than the concept, offering room for four rather than the concept’s occasional rear seating arrangement.

On the outside, expect similar design arrangement to the S90’s front and rear. The front will offer LED headlamps with a ‘Thor’s hammer’ lighting signature and, at the back, there will be an interpretation of the saloon’s C-shaped brakelights – applied to a lower, sleeker coupe body.

The C90’s cabin will also likely bear a striking resemblance to the S90. Given the slightly sportier nature that comes with a two-door bodystyle, expect a lower-slung driving position from more body-hugging seats than the saloon. There should be comfortable room for four adults, with two individual rear seats taking the place of the S90’s three-abreast rear bench.

While the S90 lineup is diesel only currently, expect the C90 to borrow some of the turbocharged four-cylinder petrol units from the XC90. Every new model rides on a subtly tweaked version of the same platform, which means that the C90 will be able to offer four-wheel drive. It also opens up the possibility of a plug-in hybrid option.

The C90 won’t hit showrooms anytime in the near future. We don’t expect to see anything approaching a production model until 2018, with the car likely to hit the roads a year later. Prices will be higher than the S90 saloon so entry-level models could cost around £45,000.