Volvo V40 Volvo V40 facelift: what you need to know

Volvo V40 facelift: what you need to know 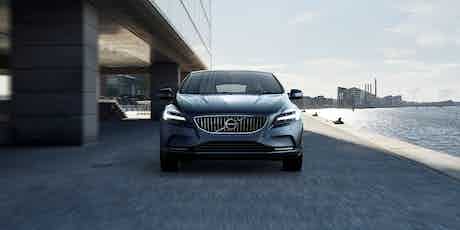 Volvo has treated its V40 and V40 Cross Country premium hatchbacks to a mid-life refresh. As the best-selling cars it produces, the Audi A3 Sportback and BMW 1 Series rivals are considered “vital” to the success of the Swedish brand.

The changes will appear from 2017 models onwards and range from styling adjustments to infotainment upgrades. Many alterations are tricky to spot, so we’ve taken a look at all the important revisions you’ll need to know about.

The styling changes are hard to spot at first glance, but the most important detail comes in the form of new headlights. Equipped with full-LED technology across the range – a first among its rivals – they feature the “Thor’s hammer” lighting signature found on the XC90 and upcoming V90. This also means that the daytime running lights mounted in the bumper of R-Design and Cross Country models are no longer required, tidying up the front end.

The grille gains the most modest of tweaks, featuring a new mesh pattern and Volvo logo. Elsewhere, standard models receive a revised diffuser in the rear bumper, flanked by new rectangular exhausts and R-Design cars feature updated side skirts.

More palatable than before

The V40 is available with five new colour options. Three – Bursting Blue, Mussel Blue and Luminous Sand – are introduced to the V40 from elsewhere in the Volvo range, while Amazon Blue and Denim Blue are brand new shades.

In addition to the colours, there are now eight different alloy wheel designs to choose from. Trim levels have been renamed, with Momentum, Inscription, R-Design and Cross Country now available, mirroring the options on the XC90.

The most frugal Volvo V40 yet

The majority of the engine lineup remains the same as before – three petrol and three diesel units are offered – but the D2 diesel has been reworked to improve efficiency. The 120hp 2.0-litre unit’s CO2 emissions have dropped from 94g/km to 89g/km. This should also see the already impressive fuel economy increase from its current 78.5mpg.

More connected than ever

The Volvo On Call internet-enabled software allows numerous functions of the V40 to be controlled or monitored via a smartphone app. Available for Apple, Android and Windows devices, On Call can sync your mobile calendar with the navigation system to ensure you never miss an appointment.

Elsewhere inside, things remain nearly identical to the outgoing model. Changes come in the form of a new ‘City Weave’ upholstery option (a mix of cream and tartan fabric) and three new aluminium-effect trim choices for the dash and door grab handles.