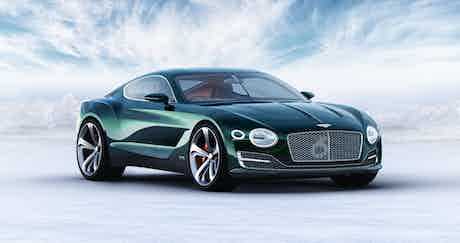 Reports suggest that Bentley is working on a new sporting coupe to sit alongside its popular Continental GT model. Taking inspiration from successful 1920s Le Mans driver and Bentley CEO Woolf Barnato, it’s expected to be called the Bentley Barnato.

It’s likely to go on sale in 2019 and battle the likes of the Aston Martin DB11 and Porsche 911 Turbo. It’ll be part of a Bentley line-up hoping to boost the brand’s sales to more than 20,000 per year.

If you’re not sure what car to buy next, our list of the ten best luxury sports cars and GTs on sale today can help you choose one that’s right for you. Our new car deals pages are the place to go for a great deal once you’ve made a decision.

The new Barnato is going to be a sporting coupe, a little smaller than the Continental GT but sitting alongside it in the Bentley line-up. Styling looks set to be heavily based on the EXP 10 concept that debuted at the 2015 Geneva Motor Show – a design that wowed show-goers and previewed the brand’s future styling direction.

The concept looked like the lovechild of the current Continental GT and one of Aston Martin’s current models, as in both elegant and athletic, but reasonably compact. The traditional Bentley grille is lower and wider on the concept car, with dramatic lights at both the front and rear. Recent spy-shots suggest that the majority of these details have transitioned to the production version.

No images of the new Bentley’s interior have been sighted as of yet, but expect a luxurious, leather-lined cabin that puts most other production cars to shame. In typical Bentley-style, all of this will be hand-made and feature only the highest quality materials – there might even be an expensive clock like on the Bentayga SUV.

Expect there to be lots of new technology inside too, with some form of Audi’s virtual cockpit a distinct possibility. Coupled with a large touchscreen, the Bentley might end up with the brand’s best infotainment offering, especially with the inclusion of Apple CarPlay and Android Auto.

Like in other Bentley coupe models, expect to see a 2+2 seating arrangement, but given the smaller footprint of the Barnato, it seems unlikely that rear passengers will have anywhere as much space as in the Continental GT. Still, there should be a good sized boot, perfect for a weekend break for two in the South of France.

Seeing as though the Barnato is intended to be the sportiest Bentley yet, we’d expect the new car to set a new standard for the brand in terms of sharp handling and impressive body control. Of course being a Bentley, refinement will be key too, but there will be plenty of scope to give enhanced driving pleasure with lots of electronic gizmos and frighteningly effective carbon ceramic brakes.

In terms of engine choices, we’d expect few surprises in terms of what Bentley intends to offer. Spy shots show the car testing with the standard Bentley 6.0-litre W12 engine, probably with around 600hp, but the smaller 4.0-litre V8 turbocharged engine found in other new Bentleys is also highly likely to follow.

The Barnato will be based on Volkswagen’s new MSB platform, it should share a lot with the upcoming new Porsche Panamera. Admittedly it’s unlikely that diesel or V6 versions will appear, but a plug-in hybrid of some sort seems highly likely – a prospect that could excite wealthy green-minded car enthusiasts, if there is such a thing.

Although the Barnato will be the smallest model in the Bentley line-up, that doesn’t necessarily mean that it’ll be the cheapest, as the manufacturer looks set to target wealthy young buyers who might otherwise be looking at the likes of Ferraris and Lamborghinis.

That means that you shouldn’t expect a price much under £150,000, with plenty of scope for that to rise with a lengthy options list. Eventually there could be a convertible model and maybe a hardcore flagship to really bring the fight to other exotic brands, expect these to be priced accordingly.

The Bentley Barnato is likely to go on sale in 2019, so expect to see it at a motor show in 2018, possibly with a new concept car giving us more clues about its styling in 2017.

If you can’t wait for the new Barnato, our car chooser tool is here to help you find your perfect luxury car. Once you’ve made a decision, use our car configurator to get a great price from the country’s best dealers.