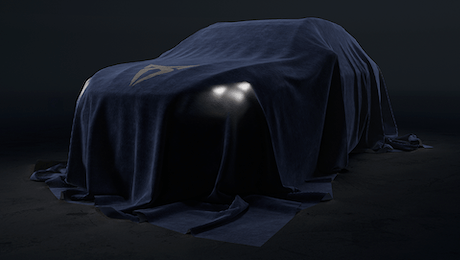 Cupra has confirmed a new SUV is on the way, and it’ll come with a range of hybrid engines. Read on for full details.

Cupra is set to introduce a new hybrid SUV in 2024 as a sister car to the existing Cupra Formentor. This is your first (albeit covered) glimpse at the forthcoming model.

Set to be built alongside the Audi Q3 Sportback, it’ll likely serve as an alternative to the BMW X1 and Volvo XC40.

You’re not going to notice much from this sheet-covered teaser, but you’ll instantly tell this Cupra SUV is going for a racier look than a big boxy design.

The giveaway comes from the side profile, with a roofline sloping into the rear – a bit like the Audi Q3 Sportback.

Check out these Audi Q3 deals

This new Cupra SUV will be built alongside that car, and is expected to share numerous bits with Audi’s smallest coupe-style SUV.

You’ll notice the bonnet dipping in towards the front bumper too, and some clustered LED headlights peeking through the cover.

Cupra has confirmed this new SUV will come with plug-in hybrid and ‘mild’ hybrid engines. The latter being a small battery strapped to a petrol engine for a little extra assistance.

It could take its lineup directly from the Cupra Formentor range. This could include a 1.5-litre plug-in hybrid option with the potential for 2.0-litre petrol cars in higher-performance guises with as much as 310hp.

Cupra has also confirmed the plug-in hybrid car will be able to cover ‘around’ 62 miles on a single charge.

Cupra will introduce this new SUV in 2024. Expect pricing to kick off around £26,000, though rising significantly for high-power, high-spec versions.

Keen on a new SUV? Take a look at the latest models available through carwow