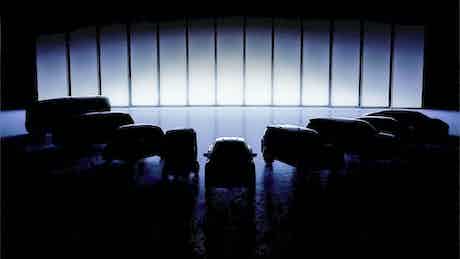 Kia has announced that it will launch a range of seven new electric cars by 2027. These won’t be modified versions of current Kias with their petrol engines replaced by electric motors – rather they’ll be all-new models that will only be available with electric power.

Kia has released teaser images to give you an idea of what several of these new cars will look like.

First up is a teaser image for a new small Kia SUV. This compact crossover will be built using many of the same electrical components as the upcoming Hyundai Ioniq 5. Because of this, the new Kia crossover is likely to match the Ioniq 5‘s predicted 310-mile range and could cost close to £40,000.

This new car has been spotted testing in prototype form (shown above), and Kia has confirmed it will reveal its new electric crossover in the first half of 2021. It’s likely that this new EV will be one of the first new Kia models to go on sale – possibly as early as late 2021.

Kia has also teased an all-new electric SUV. This teaser image shows a new EV with boxy styling, plenty of ground clearance and a square cabin design, that could suggest it has seven seats. It’s possible this new electric car could be a replacement for the current Kia Sorento – a petrol- or diesel-powered four-wheel drive SUV with seating for seven.

This new electric car could also be built using the same underpinnings as the crossover, and the upcoming range of Ioniq models from Hyundai. It is likely to share a great deal with the Ioniq 7, a similarly large SUV that Hyundai could release before 2024.

As well as a range of new electric SUVs and MPVs, Kia will also launch a range of what it calls ‘Purpose-Built Vehicles’. These will use the same modular underpinnings and have been designed mainly as small commercial fleet vehicles for use in urban areas. Kia has also hinted at these being used by delivery companies, ride-sharing services and small businesses.

If you can’t wait for these new Kias to go on sale, compare the best electric car deals available through carwow right now, or check out the latest Kia e-Niro offers for a range of deals on Kia’s excellent small electric SUV. Not sure what you want? Let carwow help you choose your ideal new car.