New Citroen C4 and e-C4 on sale: price and specs 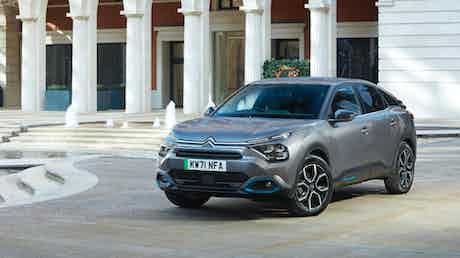 The new Citroen C4 is on sale now, along with the e-C4 electric version. Here’s all you need to know about this quirky hatchback.

The new Citroen C4 is on sale now in UK dealerships, alongside the electric e-C4. In this article we’ve put together everything you need to know about the car, to help you decide if it’s the right new car for you.

The new Citroen C4 is a family hatchback similar to the Volkswagen Golf and Ford Focus, but as with many models in the Citroen range, it’s not as traditional as those cars. It has a few elements of SUV styling, for example, and there’s even a coupe-like roofline at the rear.

Compare the best hatchbacks on sale

There’s a new set of LED lights that have a different look to previous Citroens – it’s sharper and bolder than before. It also has a much more sporty shape than other cars in the range which tend to have a softer, more rounded look. It’s more in line with other sharp-styled models that are a similar price, such as the SEAT Leon.

The Citroen C4’s interior isn’t as unusual as the one in the old Citroen C4 Cactus nor the C3 Aircross. It’s more traditional, with dark, soft-touch materials and a large 10-inch media system with sat-nav and smartphone connectivity.

The dash has a more dramatic design as well, with sweeping lines rather than the flat and practical set-up in other Citroens. There’s also a digital dial display and wireless smartphone charging available as part of the infotainment system.

The Citroen e-C4 is the all-electric version of the C4, but it’s not a totally different car – you’ll have to look closely for the small styling details and badges to tell that it’s the EV model.

The e-C4 has a 136hp electric motor with a 50kWh battery, which means it will go from 0-62mph in 9.7 seconds and has a top speed of 93mph. The relatively small battery pack gives it a range of 217 miles from a single charge.

You can charge at a rate of 100kW on public chargers, for a 30-minute top-up to 80 per cent battery.

The Citroen C4’s SUV-like styling means it’s a bit larger than alternatives such as the Volkswagen Golf, but it has a boot capacity of 380 litres, which is average for this size of family car.

However there is a lower section of the boot, which is useful on the e-C4 model because it’s a good place to store the charging cables.

There are four trim levels for the petrol and diesel Citroen C4: Sense, Sense Plus, Shine and Shine Plus.

Move up to Sense Plus and you get a head-up display, sat-nav, a tablet holder on the dash, an auto-dimming main mirror and a reversing camera. Shine models get more safety kit including traffic sign recognition, adaptive cruise control and blind spot assist. You also get keyless go on this model, and e-C4 versions have a heated steering wheel.

Shine Plus is the top-spec model and features a premium stereo system leather seats with electric adjustment and heating, four USB sockets and wireless smartphone charging.

The Citroen e-C4 is available in Sense, Shine Edition and Shine plus trim levels. All cars get automatic headlights, a 10-inch touchscreen and dual zone climate control as standard.

Step up to Shine Edition and you get active cruise control, a reversing camera and a heated steering wheel. Top spec Shine Plus adds heated seats, an upgraded sound system and wireless charging for your phone.

The C4 has plenty of choice when it comes to engines. Alongside the electric-only e-C4 model, there are three petrol- and two diesel-powered models.