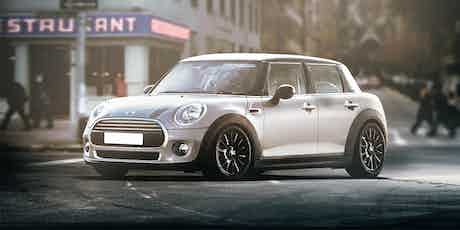 Mini will expand its current range with a Saloon version of its popular hatchback. Our exclusive render shows you how it could look…

Mini is expected to launch a larger Saloon version of its retro styled hatchback to compete with the likes of the Mazda 3 Fastback and Audi A3 Saloon. No official images have emerged of what this new car will look like, but carwow’s exclusive render shows how it could look when it goes on sale.

We expect the new Mini Saloon to feature similar retro styling to the rest of the Mini range. The large round headlights and curvaceous bonnet will almost certainly feature, as should the recessed fog lights and chunky chrome grille surround.

Dark-coloured door pillars and a contrasting roof should ensure the new car is instantly recognisable as a Mini, despite the large boot behind the rear wheels. Thick black wheel arches have become another of the brand’s trademark features, so we expect these to make an appearance on the new Saloon, too.

The five-door Mini’s front end is almost identical to the standard hatchback’s and, as a result, we don’t expect the new Saloon variant to come with any radical styling changes either. Mini’s huge range of customisation options should allow Saloon buyers to personalise their car as heavily as any other in the brand’s range. If anything, a larger boot simply gives you more bodywork to plaster with chequered decals and Union Flag paint jobs.

Mini could be planning to launch a saloon model in the next few years to compete with the likes of the Audi A3 Saloon and the cheaper Mazda 3 Fastback. Read on for all the information we know about the Mini Saloon so far.

Saloon cars are very popular in China and North America and it is believed that this car will be designed with these markets in mind. It will, however, still be available in the rest of the world, too.

If you’d prefer a practical hatchback or a funky crossover to a saloon, our Mini Hatchback configurator and Mini Countryman configurator are here to help you get your next new car for a great price.

Mini builds some of the most instantly recognisable cars of any manufacturer. From the compact, two-door Coupe to the four-wheel drive Countryman, every car it makes has a strong retro character and a clear Mini identity.

We expect the new Saloon to follow a similar template, featuring the familiar Mini headlights, front grille and large black wheel arches. Black window pillars and a graceful sloping roof should give the new car a more elegant silhouette than the current Mini Hatchback or Clubman estate.

The new saloon will probably feature a similar interior to the current Mini range – a large centrally mounted infotainment screen and instruments mounted on the steering column are features we expect to see.

The new car will be built using the same UKL1 platform as the rest of the range but we expect the rear passenger room to suffer slightly as a result of the saloon-style roof. Many manufacturers have focused on maximising passenger legroom in this segment and this element of competition could play an important part in finalising the proportions of the new car.

We expect the new saloon to comes with a similar selection of engines as the current range of Mini Hatchbacks and Clubman estate cars. The 1.2-litre three-cylinder petrol and diesel units should offer a good combination of performance and economy, while a 2.0-litre Cooper S model will cater for customers looking for a more sporty model. This engine should be able to sprint the new car from 0-62mph in around seven seconds.

A significant selling point for Minis has been their very engaging handling. We hope this new car will be just as fun to drive as its smaller siblings, yet comfortable enough to compete with the current crop of rival saloons. A version with a four-wheel-drive system, such as that fitted to the Clubman ALL4, could also make an appearance.

No official release date has been announced but we will certainly see concept cars and pre-production models teased in the near future. We will keep you updated as soon as new information is available, so watch this space.