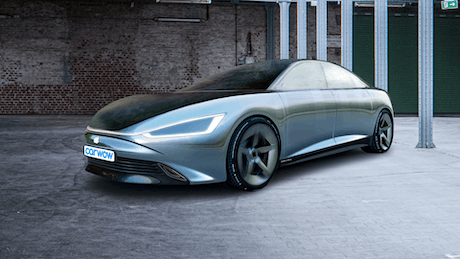 A wave of patents suggests the Californian tech giant is getting more serious about making it a reality — and these exclusive renders show how it could look.

Apple products tend to be little more than a slab of the screen these days, and that wouldn’t change for its car by the looks of it.

This patent filed by Apple suggests even its exterior bodywork would work as a screen, showing graphics such as the vehicle’s speed and warning signals.

It’s even suggested you could customise the look of the car with these — like slapping some sweet hot rod flames on it.

It looks as though the Apple Car would use proprietary technology for any autonomous driving assistance system.

The firm has previously hired engineers from other car firms such as Mercedes and Tesla to work on this tech, so there’s serious brainpower behind it.

This patent suggests Apple would use LiDAR tech with hidden reflectors all over the car, meaning no ugly sensor boxes spoiling its sleek design.

Even climate control could work differently in the Apple Car. This patent shows sensors that can adjust the temperature according to your body temperature.

That would work with this glass technology that’s can darken itself to regulate the heat coming into the cabin. That’ll be handy on the coast of California — perhaps less so in Cheltenham.

Here’s a weird one for you — driving with no steering wheel. This patent for the Apple Car suggests it could be controlled with hand gestures. Seriously.

It’d be a bit like playing Mario Kart on the Nintendo Wii. It’s probably not advisable to throw banana peels at cars behind you, though.

If this patent is to go by, you wouldn’t even need to plug your Apple Car in — it could do it itself. You’d just have to pull up to the charger and let the car do the work.

Apple has even patented technology that would allow cars to charge on the move and even share power. There’s potential it could licence this tech out to other car manufacturers.

Will an Apple Car ever make production? That’s a question raised commonly over the last decade.

Apple will want to be sure the car wouldn’t fail, and it now has a case study in the form of Dyson to show that a tech giant becoming a car manufacturer isn’t straightforward.

Dyson canned its EV project in 2019, stating it couldn’t be made commercially viable.

That said, Foxconn — which builds Apple’s iPhone — has recently just launched its own line of cars. Apple could lean on them for production or, perhaps more likely, licence out some of its patents to the firm.

Want to go electric with your next car? Compare EVs on sale today