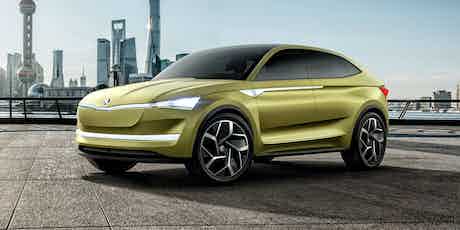 Skoda’s lifted the lid on its new Vision E Concept – a car that’s expected to inspire the upcoming Kodiaq Coupe. The Concept’s advanced electric drive system could also make its way into the new, more stylish Kodiaq variant when it goes on sale before 2020.

The Vision E Concept’s sharp, elegant styling is expected to be carried over mostly unchanged to the Kodiaq Coupe. The most obvious modification could be the addition of a front grille – to channel air to the Kodiaq’s engine and radiator – thicker roof pillars to offer greater crash protection and conventional doors in place of the concept’s pillarless items.

Our exclusive render, above, imagines what the Vision E’s features could look like in production-ready Kodiaq Coupe form. Significant changes over the standard, rather boxy Kodiaq could include slimmer, more aggressive headlights, an elegant sloping roofline and remodelled front bumpers.

Unlike the Vision E, the Kodiaq Coupe should boast five usable seats and a practical, family-oriented cabin. Despite its slinky styling, it’s expected to boast more head and legroom than rivals from BMW and Mercedes and should feature a more capacious boot, too. Unlike the standard car, the coupe’s not expected to be offered with a practical seven-seat option.

The new coupe’s dashboard should look almost identical to the standard Kodiaq’s. A similar selection of classy gloss-black trim pieces, a minimalist button layout and impressive build quality should all help it feel suitably upmarket without making it any less practical. The Kodiaq’s touchscreen infotainment system should also receive a few tweaks and updates by the time the coupe goes on sale.

Entry-level models could be powered by a new 1.5-litre four-cylinder petrol engine producing 148hp while more powerful 190hp 2.0-litre diesel models will almost certainly be offered, too. As standard, the coupe could be fitted with front-wheel drive and a manual gearbox while higher-spec models should come with both four-wheel drive and a DSG automatic ‘box.

The Vision E Concept points to Skoda offering a fully electric or hybrid version of the upcoming coupe, too. Using a combination of a frugal petrol engine driving the front wheels and a compact electric motor powering the rears, this model should offer both four-wheel-drive grip and impressive fuel economy figures.

A leaked images from Autohome China, shown above, suggests the Kodiaq Coupe will be released after a pair of other new models. As a result, Skoda’s new flagship SUV might not go on sale until 2020. When it does hit showrooms in the UK, we expect it to carry a sizeable premium over the standard £12,495 Kodiaq.