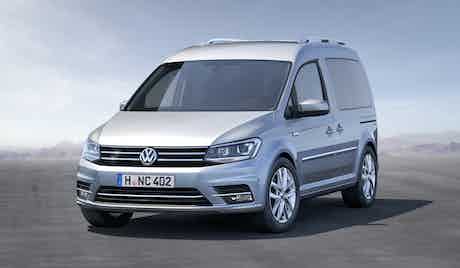 We don’t often cover the latest van-based news on carwow, but there is one model in the new Volkswagen Caddy range which will be of note to private buyers.

The Caddy Life will be offered as an alternative to the likes of the Citroen Berlingo Multispace and Ford Tourneo Connect, throwing seats in the back of the van to produce a highly practical MPV.

In fact, “throwing” is perhaps doing the Caddy Life a disservice, because each generation of Caddy is becoming gradually more car-like in terms of refinement and equipment. The interior appears to be very high quality for a van. In fact, it seems very reminiscent of another VW Group product, the Skoda Rapid – it even nudges more upmarket in areas such as the large touchscreen media system.

Although it is yet to be confirmed which engines will find their way into the Life in the UK, three diesel options are available. All displacing two litres, the turbo diesel units produce 74, 100 and 148 horsepower respectively. A Bluemotion version is predicted to return over 70mpg, which will make it as useful for private buyers as for commercial users. It’s even possible to specify the DSG dual clutch automatic gearbox, for smooth, efficient shifts.

Volkswagen is keen to emphasise the generous safety equipment offered in the Caddy. One such feature is Front Assist, which uses sensors to monitor its surroundings, and incorporates City Emergency Braking, which intervenes if the driver doesn’t see an obstacle ahead. It can bring the Caddy to a complete halt below a speed of 19 mph without you even touching the brakes.

Beyond that, the Caddy Life gains side and curtain airbags, while a multi collision brake system prevents subsequent collisions by bringing the Caddy to a complete halt after an initial impact. The inclusion of adaptive cruise control will make driving much easier on motorway slogs, and is even capable of bringing the car to a complete stop if equipped with the auto gearbox. Finally, a reversing camera will make parking such a large car much less of a hassle.

Prices and full specs have yet to be confirmed, though the new Caddy Life will go on sale later in 2015 with first deliveries expected before the end of the year.