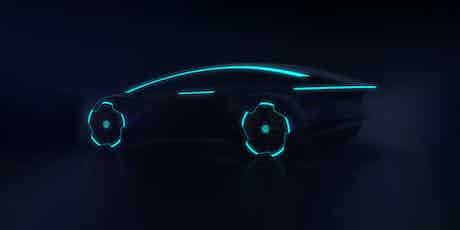 Volkswagen has teased a new all-electric car, which is set to feature state-of-the-art autonomous technology when it goes on sale around 2026. Read on to find out more.

Volkswagen has revealed it’s working an all-new flagship car – with the outcome of its so-called ‘Project Trinity’ set to serve as its ‘innovation leader’. The finished car will start production in 2026.

Volkswagen has released a few teaser images of the upcoming car, although they reveal little more than the fact the car will be long, low and likely take the shape of a four-door coupe.

Think of a more luxurious, electric version of the Volkswagen Arteon and you probably won’t be wide of the mark — just don’t expect the Tron-esque lighting in the image below to make production.

Though further details on the car itself remain a mystery, the firm has outlined a handful of headline points about its Project Trinity.

Eventually, all new cars produced by the Volkswagen group (including those made by Audi, Porsche, Bentley, Skoda and SEAT) will use this chassis technology, which can accommodate electric motors producing between 115hp and more than 1,150hp.

Project Trinity will be crammed with autonomous technology too. Volkswagen says it will be ‘level 2+’ at launch, meaning features like driver monitoring and adaptive cruise control that’ll assist your steering inputs will feature as a bare minimum, with the car being ‘level 4 ready’ later on. That would mean full self-driving capabilities.

As part of that, Trinity will also see the interior taking a direction which focuses entirely on the passenger experience. Current Volkswagen CEO, Herbet Diess, has said it will be somewhere for people to “eat, work and play”.

Finally, Volkswagen is planning to overhaul its factory in Wolfsburg, Germany, to build electric vehicles in a ‘highly efficient and economical way’.

Another teaser image showing a CGI car under a virtual blanket has also been released. It appears to show the car as having a front end inspired by the Volkswagen ID.3 hatch, with bulbous headlights flanking a thin full-width light strip, as well a sleek, long body style.

A pair of unusually short wing mirrors on each side suggests the new car will come with rear-facing cameras that beam live video feed to inboard screens – just like on the larger Audi e-tron.

It’s unclear at this point if the resulting car will form part of the ID. lineup or start a new model line, though. Keep your eyes peeled for more news on this one.

Compare the latest electric car deals or see how much you can save on another electric VW by heading to our Volkswagen ID.3 deals page.