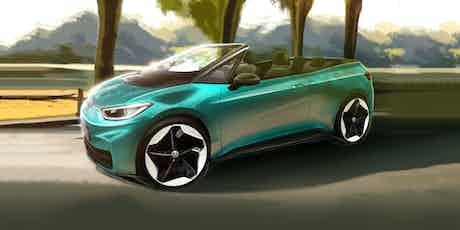 Could the all-electric Volkswagen ID3 be about to lose its roof? A new design study released by the German giant suggests so. Read on for full details.

The Volkswagen ID3 is an all-electric hatchback that’s about the size of a Golf and is an alternative to the Nissan Leaf and Hyundai Kona Electric. It could be about to get a convertible ‘Cabriolet’ version if a new design study makes it to reality.

So far, all that’s been shown of a potential Volkswagen ID3 Cabriolet is a colourful illustration of the proposed design – it’s not a faithful representation of what the finished car could look like. However, it’s clear to see this is an ID3, with its boxy face fronted by a grille-width LED light bar.

At the back, it’s a similar story to the hatchback too, with a set of thin brake lights on a fairly featureless rear end. There is the obvious omission of the roof too, which appears to be a collapsible fabric piece, like on the Volkswagen T-Roc Cabriolet.

It’s safe to assume that the new VW ID3 Cabriolet (should it enter production) will come with the same 58kWh battery as found in the hatchback, though its maximum range of 263 miles between charges would be a hard feat to match due to the extra weight that comes from a convertible bodystyle.

There are no images released of this design study Volkswagen ID3 Carbiolet’s interior, but it’s likely it will look nearly identical to the standard hatchback’s interior (shown above.) That would mean some rather funky-looking trim options, a digital driver’s display and a large touchscreen infotainment system.

If the Volkswagen ID3 Cabriolet does go into production, it likely won’t happen soon. Assuming it’s now in the development stages, it could be well into 2022 or 2023 before you see the finished car.

Prices would probably start above £30,000 — a fair increase on the hatchback’s current £28,670 starting price.

Don’t want to wait to see if the Volkswagen ID3 makes production? Find the latest deals on the hatchback or read more about the best convertibles on sale now