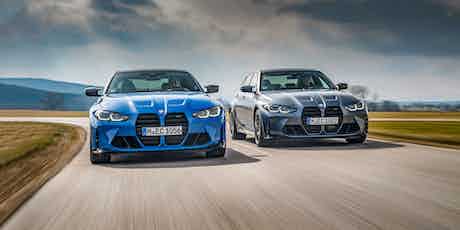 You’ll soon be able to buy all-wheel-drive versions of the BMW M3 and M4 for the first time. Read on for full details on these new high-performance xDrive models.

Both cars still use a 3.0-litre twin-turbocharged straight-six engine, producing 510hp and 650Nm of torque in Competition guise, though both will accelerate from 0-60mph in 3.5 second — 0.4 seconds faster than their rear-wheel-drive equivalents.

It’s more than just straight-line speed that’s improved for the BMW M3 and M4 xDrive, though. Each gets an ‘Active M’ differential, which optimises power distribution across the car to get the best traction possible. In most driving conditions, it’ll send full power to the rear wheels — only delivering it to the front axle when it detects the rear wheels start to spin.

You will be able to choose from 10 different traction control settings, one off which is sends all the engine’s power to the rear of the car. Rear-driven versions of the M3 and M4 will remain on sale, too.

The new BMW M3 and M4 both feature a similar huge grille to the upcoming 4 Series Coupe. Though, the gaping black-painted kidneys look far more at home on these aggressive M cars than on the humdrum 4 Series thanks to plenty of other huge (and completely real) air intakes and vents.

The M3 and M4 get a heavily sculpted bonnet with scalloped details behind the BMW badge. Both cars are wider than their predecessors – the M4 by almost two centimetres and the M3 by almost three centimetres.

The new cars’ side skirts are more pronounced than before, too, and you can pick from a pair of new alloy wheel designs that measure 19 inches at the front and 20 at the rear. Speaking of the rear, both the M3 and M4 come with a black rear diffuser with a quartet of 10-centimetre exhausts pipes poking out underneath.

The only body panels carried over from the standard BMW 3 Series and 4 Series are the doors and the bootlid – everything else has been given the beefed-up M treatment.  No wonder the M3 looks like a touring car and the M4 looks like a mini M8 – especially from the back.

BMW has also confirmed that’ll it’ll build an M3 Touring for the first time ever. This high-performance estate will come with the bold design as the new M3 and M4 but add a bucketload of extra boot space.

Get more info on the BMW M3 Touring

The interiors of the BMW M3 and M4 have been given the M treatment, too. There’s a chunkier M Sport steering wheel with M-coloured stitching and programmable M driving mode buttons, alongside a red starter button, an M-badged gear lever and plenty of carbon-fibre trim as standard. It’s on the steering wheel, the centre console and the gear-shift paddles.

The M Sport seats come with built-in M logos (that light up) and can be specced with two-tone trim – for an extra £300. Even better are the optional carbon-fibre bucket seats. They are even more supportive, come with electric adjustment and get plenty of vents to stop you feeling sweaty on a hot summer’s (track) day. Shame they’ll set you back £3,500.

You don’t have to pay extra for a fancy infotainment system, though – every M3 and M4 gets BMW’s latest iDrive tech as standard. This comes with two large screens, a head-up display system, BMW’s clever personal assistant voice command system and wireless Apple CarPlay and Android Auto.

The standard BMW M3 and M4 come with a 3.0-litre twin-turbo straight-six engine that produces 480hp. Pick a Competition model and this gets bumped up to 510hp and 650Nm of torque. That’s 60hp and 100Nm more than the old Competition cars could manage.

The M3 and M4 come with an eight-speed automatic in Competition form — the only spec you can have in the UK. Other markets get the base version of the car, which has the option of a six-speed manual. This is a torque-converter instead of the old cars’ seven-speed dual-clutch gearboxes and will get the same near-bulletproof launch control system as the BMW M8.

All-wheel-drive ‘xDrive’ versions of the car cut that further to 3.5 seconds.

The new BMW M3 and M4 will be available with four-wheel drive instead of rear-wheel drive for the first time. This system has been pinched from the BMW M5, so it’ll let you decide how much power you want to send to the rear wheels. Turn all the electronic safety systems off and it’ll send all the engine’s power rearward to allow for some seriously smokey drifts – on a race track, of course.

The BMW M3 and M4 come with a carbon-fibre roof to make their chassis stiffer and lower the cars’ centre of gravity to reduce body lean in fast corners. Despite this, the M3 and M4 both weigh around 1,750kg – that’s around 160kg more than the old models.

Carbon-ceramic brake discs measuring 400mm at the front and 380mm at the rear are available as part of an £8,000 upgrade pack that also bumps the top speed from 155mph to 180mph.

You can upgrade the look of the BMW M3 and M4 further with a carbon pack as part of the optional M Performance Parts.  This includes a redesigned front bumper with deep carbon-clad intakes instead of plastic mesh, carbon door mirrors, a carbon rear spoiler and a carbon finish for the rear diffuser. All in, it costs £4,000.

Other optional M Performance parts include a titanium exhaust that’s five kilograms lighter than the standard steel item. It looks different, too, thanks to a new stacked arrangement of the four exhaust tips.

You can also add adjustable coilover suspension to your M3 and M4 that lets you lower the car by 10mm. New alloy wheels are also available that measure 20 inches in the front and 21 in the rear.

You can also choose from a selection of M Performance interior upgrades. These add additional carbon fibre to the door sills and Alcantara – instead of leather – trim on the steering wheel.

The BMW M3 and M4 are on sale now, but in the UK, you can only get the upgraded Competition models. That means there’ll be no 480hp versions and you won’t be able to get a six-speed manual gearbox. The M3 Competition costs from £75,000 and the M4 Competition will hit you with a £76,200 bill. That’s getting on for £8,000 more than the outgoing cars.

Read our guide on how to spec the perfect BMW M3 and M4 or check out the latest carwow offers available on the best sports cars on sale.