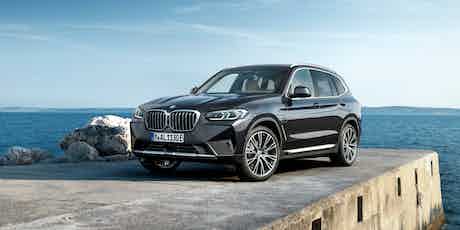 The BMW X3 and X4 pairing has been refreshed with some styling tweaks, equipment upgrades and mild-hybrid tech across the board. Read on for full details.

Each gets styling updates, some new equipment and mild-hybrid technology as standard on all engines.

Tweaks to both the BMW X3 and X4’s design aren’t drastic, but not so subtle as to leave you oblivious to them. The ‘kidney’ grille has been made a bit larger and is now made of a single piece rather than split up by the bodywork.

Flatter headlights have been added too, with adaptive LED units now coming as standard. Changes at the back of the X3 and X4 aren’t major, though you do get completely new taillights on the X3.

A fresh 19-inch alloy wheel design comes on M Sport cars as well, with 20- and 21-inch units available as an option.

There’s a fair bit of change inside both the BMW X3 and X4. The centre console on both cars has been given a complete redesign, doing away with a cluttered climate control system to bring those functions into a simpler row of buttons.

A 12.3-inch touchscreen infotainment system also comes at no extra cost as well, with new sports seats also joining the standard equipment list. Leather seats now come as standard on both the X3 and X4.

Though the core engine line-up of the BMW X3 and X4 hasn’t seen a major overhaul — you still have a good choice of petrol and diesel engines — each does now come with 48v mild-hybrid technology as standard.

This allows the engine to cut off a little earlier when coming to a standstill in a bid to save fuel and reduce emissions. All get all-wheel-drive and an eight-speed automatic gearbox as well.

A plug-in hybrid option is still available for the X3 as well, though not the X4, which gives the SUV up to 31 miles of electric-only driving.

Both the revised BMW X3 and X4 are now on sale, with first deliveries set to begin in September.