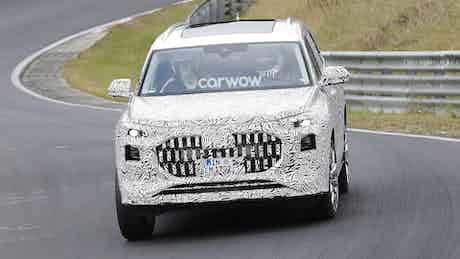 A new flagship Audi Q9 SUV is on the horizon to tempt you away from the BMW X7 and Mercedes GLS. Read on for details of everything known so far.

Prototypes of the upcoming Audi Q9 have been spotted testing once again. Set to be introduced in 2022, this new flagship SUV will be Audi’s answer to the equally massive BMW X7 and Mercedes GLS.

With it being Audi’s range-topping model, you should expect it to be packed full of technology, high-quality materials and some of the punchiest engines it offers — but with a hefty price tag to match.

Though the finer design details are well masked on these prototypes, there’s no getting around the new Audi Q9’s enormous size. A gargantuan grille, like that on the latest Q7 and Q8, is easy to spot along with boxy LED brake lights at the back.

You might be thinking the alloys on this prototype Q9 are quite small, but you can bet there’ll be much bigger options available once the car goes on sale. Top-spec cars should come with wheels up to 23-inch in size – similar to the high-performance RSQ8.

The Audi Q9’s interior hasn’t been spotted yet, but you should expect it to be packed with high-quality materials and plenty of infotainment screens.

This will be Audi’s flagship car, so there’s probably going to be a massive infotainment system, digital dials and tonnes of techy features from voice commands to wireless smartphone mirroring.

There may also be separate ‘captain’s chair’ seating in the back, like those in the BMW X7. A seven-seat configuration could be possible as well, particularly if Audi wants to take on the latest Range Rover, which is now available with a third row of seats for the first time.

The new Audi Q9 will share components with the Audi Q7, Q8 and Porsche Cayenne – although stretched to offer even more space inside.

Expect to find similar engines to these cars under the Q9’s vast bonnet, too. Entry-level cars will likely come with a 3.0-litre petrol or diesel V6, while high-spec cars (and future SQ9 or RS Q9 versions) could get a twin-turbo 4.0-litre V8 petrol engine. Mild-hybrid technology is likely to feature across the line-up, at least.

A plug-in hybrid version using the same engine as the Porsche Cayanne hybrid is probable too, but don’t expect an all-electric variant anytime soon. If you’re after a posh electric SUV, you’ll have to make do with the Audi e-tron instead.

The Audi Q9 is likely to break cover sometime in 2022, and may appear in showrooms sometime before 2023.

It’ll be one of the most expensive Audi SUVs on sale, so get ready to hand over close to £80,000 for an entry-level car.

Don’t want to wait for an Audi Q9 to get your luxury SUV fix? Take a look at the latest Audi deals or see offers on the BMW X7