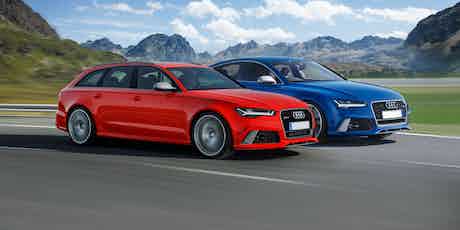 New ‘performance’ versions of both the Audi RS6 Avant and RS7 Sportback will arrive in the UK from February 2016. These top of the range models marry increased performance with best-in-class fuel economy thanks to engine and ECU system upgrades.

The 4.0-litre TFSI V8 petrol engine in both models has been tweaked to produce 597hp (44 more than standard) and a staggering 553lb ft of torque – enough to launch both the RS6 and RS7 to 62mph from rest in just 3.7 seconds. If buyers opt for the ‘dynamic package plus’ the top speed rises from the usual 155mph limit to a – frankly dangerous – 189mph.

Put either the Audi RS6 or the Audi RS7 in our car configurator to see how much carwow could help you save.

The retuned engine is still able to shut down up to four of the eight cylinders when not required to conserve fuel and reduce emissions. Fuel economy figures for the RS6 and RS7 remain impressive at 29.4mpg and 29.7mpg respectively. These may not sound impressive compared to say, a Toyota Prius but, in the world of German super-saloons, they’re class leading.

Both cars come fitted with an eight-speed automatic gearbox with paddles to allow the driver to choose when to shift, assisted by either the standard shift-indicator or optional head-up display.

The famous Audi quattro four-wheel-drive system delivers power to all-four wheels through a sports differential fitted as standard. Dynamic RS air suspension can lower both the RS6 and RS7 by up to 20mm depending on the road conditions and settings specified by the driver.

The interior of the RS6 and RS7 include, as standard, supportive Alcantara RS ‘super sport’ seats and colour coded carbon fibre detailing. Order books open this November. Costing £86,000 for an RS6 performance model and £91,600 for the RS7 version, neither offer true value for money but both are among the fastest real-world cars you can buy.

Save money on your new Audi

You could get a great deal using our Audi RS6 and Audi RS7 car configurators. If you’re not sure which of these two cars is right for you, our car chooser and new car deals pages could help.