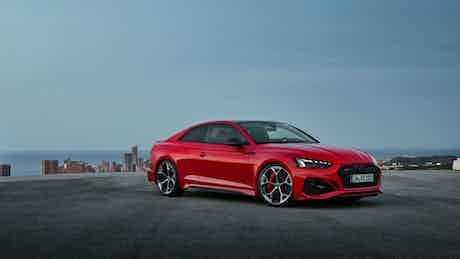 Audi has revealed a competition package for the RS4 and RS5 that includes suspension and styling upgrades. Read on for all you need to know.

The Audi RS4 Avant and Audi RS5 are getting a new competition package that comes with uprated, race-inspired suspension and a few cosmetic upgrades.

This alternative to the BMW M3 Competition and Alfa Romeo Guilia QV will be available to order later this year. They go on sale in Germany in July 2022 and cost the equivalent of around £7,000 more than the standard cars – Audi is still deciding on the specifics for UK cars.

The new Audi RS4 Avant and RS5 Competition pack get a few visual upgrades over the standard cars to make them stand out.

You’ll spot some unique 20-inch alloy wheels, a new black paint scheme unique to the competition as well as black badging around the car.

You can also get matte-finish carbon-fibre trim for the door mirrors, front grille and side vents. Matrix LED headlights come as standard.

One of the biggest changes for the Competition versions of the Audi RS4 Avant and Audi RS5 is the optional suspension upgrade that comes as part of the Competition Plus package.

For an additional cost over the Competition, you can have manually adjustable coilover suspension that’s 10mm lower compared with the standard car, and can be lowered a further 10mm for a combined 20mm drop.

The Competition Plus also gets Dynamic steering that is supposedly quicker and more responsive for track driving, as well as an uprated sport differential that can send more power to the rear wheels.

The Audi RS4 Avant and RS5 Competition get the same 2.9-litre twin-turbocharged V6 as the standard car with the same 450hp and 600Nm of torque. The top speed has increased slightly, from 174mph to 180mph.

Competition versions of the Audi RS4 Avant and RS5 get some interior upgrades over the standard car, such as a suede-like Alcantara steering wheel.

You also get plenty of carbon fibre trim on the dashboard, doors and centre console, as well as red details on the seatbelts. Unique alcantara trim on the seats finishes things off.

You’ll be able to order the Competition and Competition Plus package on your Audi RS4 Avant and RS5 from July 2022 in Germany, when they’ll set you back approximately £7,000 more than the non-Competition models.

Audi hasn’t confirmed an on-sale date for UK cars yet, but it’s likely they’ll be available in the second half of 2022 and could carry the same premium over the standard versions as the new Competition models offered in Germany.

Can’t wait for the new Audi RS4 and RS5? Check out other Audi deals available through carwow. If you’re ready to sell your car, see how easy it is to change your car with carwow and compare the latest new-car offers.