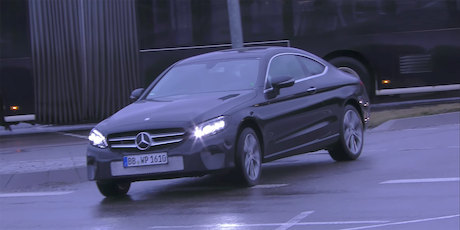 Mercedes has been spotted testing a facelifted version of its C-Class Coupe that could feature new hybrid engines. Read on for full details…

Mercedes has been caught testing a facelifted version of its slinky C-Class Coupe with a revised front end and new headlights. The upcoming car, spotted in images courtesy of YouTube channel walkoART – Videos, could feature a new hybrid engine, too.

The lack of camouflage on this early test car suggests Mercedes has chosen not to meddle too much with the outgoing car’s simple, elegant styling. Besides a new front end, we don’t expect the facelifted coupe to look any different to the car it replaces.

A more noticeable change comes in the form of two new headlights. Each unit contains eight individual LED components suggesting Mercedes is developing advanced adaptive headlights that are not only brighter, but can more selectively illuminate patches of the road ahead. If this is the case, we expect similar units to appear on more models in the German brand’s range in the future.

Some reports suggest this new car could be offered with a similar hybrid engine system to the upcoming Mercedes E-Class E50 Coupe. A 48-volt electrical system could drive not only a compact electric motor to boost efficiency, but an electric supercharger to offer improved acceleration, too.

The upcoming C-Class Coupe isn’t expected to be fitted with the E50’s six-cylinder engine, however – it may be powered by a more compact four-cylinder petrol unit instead.

The facelifted C-Class Coupe could go on sale as early as late 2017 and will probably cost approximately the same across the range as the current model. Entry-level diesel cars should cost approximately £32,000 while top-spec petrol versions could hit the £50,000 mark.