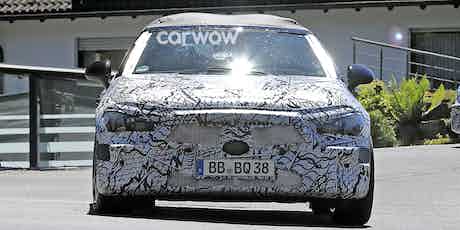 Prototypes of the upcoming Mercedes C-Class have been spotted testing, with the drop-top model set to arrive in 2023. Read on for everything known so far.

Prototypes of the upcoming Mercedes C-Class Cabriolet have been spotted testing for the first time, with this BMW 4 Series Convertible alternative set to come in 2023.

Little is known about these prototypes, which appear to be super early in development, but you can expect a mix of petrol and diesel engines — plus some AMGs to boot.

The super-heavy camouflage of these Mercedes C-Class Cabriolet prototypes suggests production is some way off, especially considering the saloon version has already been revealed.

Up front though, you can see identical headlights to the four-door car peeking through. There’s the two grille elements too, with the three-pointed Mercedes badge covered up completely.

The most interesting changes come down the side. It looks as though the Cabriolet is based on the yet-revealed coupe version of the C-Class, meaning two doors, and then there’s the roof of course.

Though it’s blathered in a sheet of matte black camouflage here, it seems as though this is a canvas unit. It’s likely to be electrically operated too — none of that hand-closing nonsense.

Backing up the canvas theory is the tiny plastic window at the back, although there’s little else of note at the rear just yet. You’ll notice the protruding lights, but those won’t make production.

No images of the interior of the Mercedes C-Class Cabriolet have emerged yet, but expect it to be near-enough identical to the classy cabin of the saloon that’s already been revealed.

Inspired by the larger Mercedes S-Class, it uses a sweeping dash that feeds directly into the centre console — with a crisp portrait infotainment system slapped in the middle. You’ll get a digital driver’s display too.

Expect the Mercedes C-Class Cabriolet’s engine line-up to be in line with the rest of the range.

That includes a mix of four-cylinder petrol and diesel engines, each with a mild-hybrid boost as standard. It’s not clear yet if the C300e plug-in hybrid will be offered for the Cabriolet though, so keep your eyes peeled for that one.

AMG versions are on the cards, though these will use a four-cylinder plug-in hybrid setup, unlike the old C63’s V8. It should be good for more than 600hp, though.

With these prototypes seemingly early in development, don’t expect a full reveal of the Mercedes C-Class Cabriolet anytime soon, with it likely going on sale in 2023.

Pricing will be a bit above the saloon, likely towards the £45,000 mark.