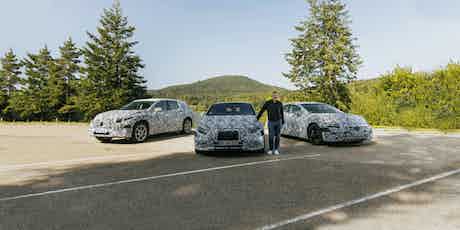 Mercedes is set to launch a whole new range of electric cars under the EQ name, starting with the EQS – the S-Class’ electric equivalent – the EQE, EQB and EQA.

Mercedes has officially confirmed that the new, all-electric Mercedes EQS is coming in 2021 alongside a range of new electric EQ models.

In addition to official pictures of the car in camouflage, Mercedes has also included a peek at some other EQ models. The brand has confirmed that there will be an E-Class-sized model called EQE, as well as SUV versions of the EQS and EQE (like the GLE and GLS SUVs).

Get all the info on the Mercedes EQS

More EQ models that have been confirmed include the EQA, which is described as “the fully electric brother of the GLA” and the EQB, which will be a family car like the B-Class. Production of these models will begin soon, ahead of a 2021 launch.

The EQS is due in 2021, and will be based on a new vehicle structure that’s set to be used to underpin many new electric cars, including the EQE and EQS SUV variants.

This new base for larger luxury EQ models will be scalable, meaning Mercedes can easily alter the size by stretching the distance between the front and rear wheels. It’ll also be able to carry varying battery sizes to make it highly adaptable to new technology, and it should also mean better packaging – meaning more room inside for passengers.

It’ll be different from the basic structure used for the smaller EQA and EQB, though – those will use existing tech adapted for electric power. A new small-car platform designed specifically for electric cars will be ready around 2025. Reports suggest that an electric version of the famous G-Class off-roader could appear in a few years, too.

The EQS will have a range of up to 435 miles from a single charge, which is one of the highest figures around – perfect for a big luxury car. Mercedes says that all the new models will use its latest MBUX infotainment set-up, though this isn’t much of a surprise.

Mercedes is in the final stages of testing the EQS on roads all over the world ahead of its reveal very soon. It’s been a long road – over two million miles of harsh tests, according to the German brand.