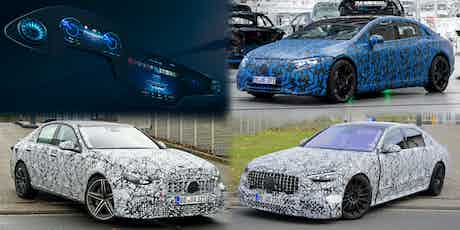 Mercedes has announced a cheaper EQC 400 model, and it’ll also build AMG versions of many of its upcoming electric cars, including the EQA, EQB, EQE and EQS.

Click on the links below to jump to the latest Mercedes news.

Check out the latest Mercedes deals

The above image (uploaded to the ‘imgbb’ photo-hosting website by an anonymous user) appears to show when Mercedes plans to launch seven new models in 2021.

The title reads ‘Overview of planned sales release and market launches’, suggesting the dates next to each car refer to when prices will be announced followed by when the car will go on sale.

There’s also a new variant of the Mercedes S-Class shown that could appear in May and go on sale in June. The ‘Z223’ code refers specifically to the Mercedes-Maybach S-Class, so it’s possible this new model is an even more luxurious or more powerful version of that car.

The AMG GT 63S four-door coupe is expected to receive a few updates in 2021, and this new image suggests you may see the finished car in May before it goes on sale in August 2021. The greatly anticipated EQS (Mercedes’ electric S-Class alternative) is also visible. This could be revealed as early as April but isn’t likely to go on sale until August 2021.

Finally, the image shows the new Mercedes SL roadster. Though it appears you’ll have to wait until the last few months of 2021 to see this new model, and it won’t go on sale until early 2022.

Mercedes has lifted the lid on what could be the most advanced infotainment system ever fitted to a production car. It’s called the MBUX ‘Hyperscreen’ and it consists of three massive displays set in a vast single-piece glass frame. It features the latest user-interface technology with haptic feedback and predictive AI (artificial intelligence) that learns how you use the system and can prompt specific features when it thinks you’ll need them.

This whopping screen will first appear in the Mercedes EQS electric car that’s expected to be revealed in early 2021 and go on sale in 2022.

Mercedes has revealed a revised entry-level EQC 400 version of its upmarket electric car. This new SUV comes with dual electric motors producing 408hp, and you’ll be able to drive it for around 260 miles between charges. Speaking of which, charging using an 11kW wall box will take around seven-and-a-half hours, while a public fast-charger can boost the car’s onboard 80kWh battery from 10% to 100% fully charged in 40 minutes.

The upcoming Mercedes EQS has been teased in an official photo from Mercedes during the launch of its latest MBUX infotainment system. This EV alternative to the recently revealed S-Class limousine will be capable of around 435 miles of driving on a single charge and its 440hp electric motors will make it a seriously rapid luxury car. It’s set to cost from around £80,000 when it goes on sale in 2022.

Prefer luxury SUVs to saloons? Well, you’re in luck, because Mercedes is developing an electric alternative to its flagship GLS SUV. Likely called the EQS SUV, this will be the most expensive car in the German brand’s new EQ range and should offer around 435 miles of range when it arrives in 2022.

As well as an electric alternative to the S-Class and GLS, Mercedes is readying an electric E-Class-sized car called the EQE. This swoopy four-door will look similar to the upcoming EQS and is set to offer around 350 miles per charge in exchange for a £65,000 price tag.

In addition to the EQA, Mercedes is also preparing to launch an electric version of the GLB. This EQB model will likely share the same electrical underpinnings as the EQA and should go on sale sometime in 2022. Like the Tesla Model Y, the EQB should be offered with five or seven seats, making it one of the most practical small electric cars around.

The new Mercedes C-Class has been spotted testing in practical estate guise and in AMG-lite C43 form. This new model will be available as a saloon, estate, coupe and convertible over the coming years, with the saloon and estate arriving first – likely before the end of 2021.

The Mercedes CLS four-door coupe is set to receive a mild visual upgrade soon, as shown by spyshots of this AMG-53 prototype.

Mercedes has confirmed that it’ll build faster AMG-tuned versions of its upcoming range of electric cars, including the EQA, EQB, EQE and EQS.

So far, only the standard Mercedes EQA has been revealed. As standard, this electric car comes with a 190hp electric motor, but Mercedes plans to build a 272hp dual-motor version with four-wheel drive. It’s likely a future AMG version of this car (and the EQB) will produce at least as much power as the 306hp AMG GLA 35 and GLB 35.

Expect hot versions of the EQE and EQS to be significantly more powerful, however. Mercedes has confirmed the EQS will come with 469hp electric motors, so an AMG model with closer to 600hp (to match the upcoming AMG S63) isn’t out of the question.

Following the new Mercedes C-Class into showrooms will be a new AMG C63 model. This car is set to lose the outgoing car’s thunderous 4.0-litre twin-turbo V8 and get a version of the AMG A45 S’s 2.0-litre four-cylinder engine – albeit boosted by a performance-focused hybrid system.

The new Mercedes S-Class will receive the AMG treatment soon, with spyshots of the upcoming AMG S63 model showing it’ll get plenty of visual upgrades in addition to a high-performance mechanical makeover. It’s likely this car’ 4.0-litre twin-turbo V8 will produce around 700hp, while a future S73 hybrid could nudge this to as much as 800hp.

The upcoming AMG-tuned S-Class won’t be the only Mercedes to benefit from performance-enhancing hybrid tech, the AMG GTS four-door is also expected to get a battery-boosted 73 version. Like the S73, this is expected to muster around 800hp thanks to the combined efforts of its electric motor and 4.0-litre twin-turbo V8 engine.

If you’re can’t wait for any of these brand-new models, head over to our Mercedes deals page to check out the latest carwow offers or, if you’re not sure what to buy, get help choosing your next car.