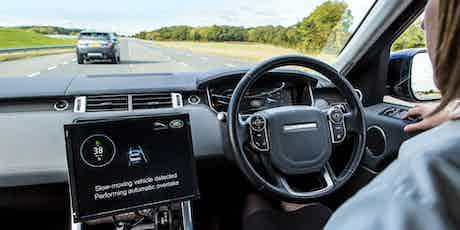 The use of automated lane-keeping technology may be allowed on British motorways later this year, but a number of caveats apply, read on for more info.

The government has just announced plans to get self-driving vehicles on UK roads by the end of this year. This first step will be limited to the use of Automated Lane Keeping Systems (ALKS) on motorways when traffic is slow.

Currently, many new cars come with lane-keeping assistance systems, but these are designed to prevent the car from straying out of its lane if the driver loses concentration for a few moments. This means you must keep both hands on the steering wheel at all times (where possible) when using these systems.

The new government plans will allow drivers of vehicles fitted with ALKS to take their hands off the wheel for brief periods while travelling on motorways at up to 37mph. This may seem slow, but anyone who regularly travels on the M25 will know that averaging this kind of speed during rush hour is next to impossible.

These new systems could make for a more relaxing commute, but don’t settle down in the passenger seat with a good book just yet – you’ll still have to be ready to take control at a moment’s notice if the system needs to be deactivated.

While this first step is a tentative one, it paves the way for a future where self-driving vehicles will be far more autonomous, be able to communicate with each other and help reduce congestion while greatly increasing road safety. In fact, human error contributes to over 85% of accidents so the move to start testing self-driving cars later this year could well have a huge impact on road safety in the years to come.

Society of Motor Manufacturers and Traders (SMMT) Chief Executive, Mike Hawes, said: ‘The automotive industry welcomes this vital step to permit the use of automated vehicles on UK roads, which will put Britain in the vanguard of road safety and automotive technology. Automated driving systems could prevent 47,000 serious accidents and save 3,900 lives over the next decade through their ability to reduce the single largest cause of road accidents – human error.’

What does it mean for you?

In the short term, not much is going to change for your daily commute but these early steps towards the implementation of self-driving systems mean that autonomous driving will eventually be an integral part of every journey. A lot of testing still needs to be done and millions of pounds of new infrastructure needs to be in place before that happens.

Check out the safest new cars on sale

Transport minister Racheal Maclean envisages that connected and autonomous vehicle technology could create around 38,000 new jobs in a UK industry that could be worth £42 billion by 2035. Over 80% of these jobs are expected to be in professional, technical and skilled trade occupations.

Whether you are for the move to autonomous driving or not, the potential benefits to our roads and the economy are definitely worth considering. The key issue to its success will hinge on how effectively the research and implementation of self-driving technology will be carried out over the coming years.