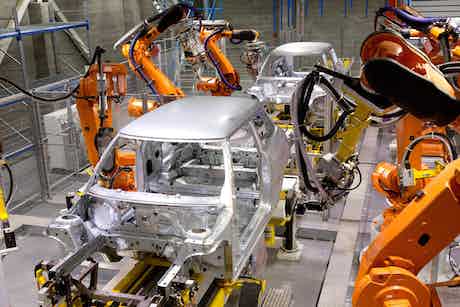 Factory closure and chip shortage means 100,000 fewer cars were produced in the first quarter of 2022 compared to the same period last year

The number of cars manufactured in the UK fell by a third during the first three months of the year, with just 207,347 cars produced – down 99,211 units on the first quarter of 2021.

The data, released by the Society of Motor Manufacturers and Traders (SMMT), indicates the closure of Honda’s Swindon manufacturing plant – famed for the Civic, and subject to permanent shutdown in July last year – played a significant role in the drop in the quarter’s numbers. US exports, which were heavily fed by Swindon, fell -63.8% in March alone.

There was an overall decline in the number of cars built for the export market in Q1 2022 and, with seven out of 10 vehicles built in the UK bound for overseas, this dictated the quarter’s overall trend.

The number of cars manufactured for the domestic UK market fell by 20.3% during the first quarter, although domestic production rallied slightly in March, growing by 4.3% compared to the same month last year.

In addition to the global shortage of semiconductor chips and the closure of Swindon, the SMMT highlighted a shortage of parts linked to the war in Ukraine as a contributory factor to the UK’s automotive manufacturing decline.

Mike Hawes, chief executive of the SMMT, warned that “automotive production is still suffering badly” two years after the start of the pandemic, and that “recovery has not yet begun”. He added that “urgent action” was needed in order to “‘safeguard jobs and livelihoods.”