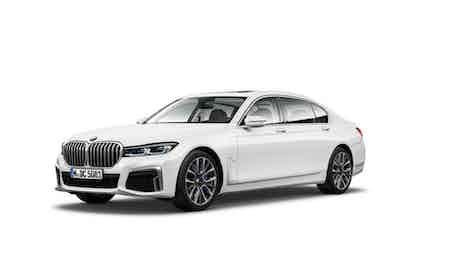 The 2019 BMW 7 Series has leaked online, again, this time in the form of configurator pics. Read on for all the info

The 2019 BMW 7 Series has leaked online for the second time this week, on this occasion in the form of configurator pics that reveal the exterior of the car in its entirety.

And, as you can see from these pics, the 2019 BMW 7 Series gets a styling revamp that means it now shares much more in common with its namesake SUV – the new X7. Most obvious of all is BMW’s new-style grille, which is now much larger than before, has a ‘3D’ design with rungs that stretch back into the bonnet and ‘kidney’ elements that are linked in the middle rather than being separated by a piece of painted bodywork.

The size of the grille is emphasised further by the car’s slimline headlights that – on the example shown here – appear to be BMW’s laser lights, which have a range of 600m and are ten times brighter than traditional LEDs. The final change up front can be seen in the lower bumper, which now has gaping air vents ahead of the front wheels.

Lighter tweaks have been made to the car in profile, the 7 Series now gets a large vertical chrome gill behind the front wheels and it drops down to a chrome strip that stretches back to the rear wheels. What we can also see is that the 2019 BMW 7 Series gets redesigned wheels – including the ‘organic’ design seen here.

The revisions made to the back of the car are a lot less obvious – there’s a sculptured louver in the lower bumper that mirrors the boot lid and a new shape for the integrated exhausts… and that’s about it. Although, the inclusion of a tow bar in the configurator images shows that, should you want to, you’ll be able to tow a ghastly caravan with your gleaming new 7 Series. The very thought…

Signup to the carwow newsletter at the top of the page to keep up to date with all the latest car news.