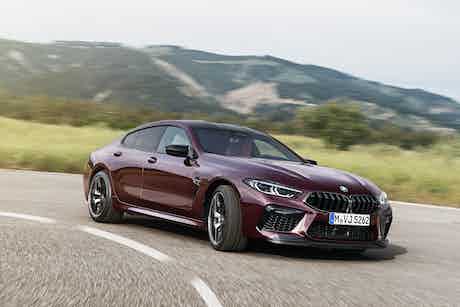 BMW has revealed full information on the BMW M8 Competition Coupe – the car you should buy if you’ll find the two-door M8, and its tiny rear seats, a little too impractical.

As you’d imagine, the M8 Gran Coupe looks like a M8 Coupe that’s been stretched and given rear doors. That means at the front you get a wide grille with svelte LED headlights, and a ground-scraping front bumper, while up top there’s a black-carbon fibre roof.

Around the sides, the black look continues in the form of de-chromed window surrounds, M-specific black wing mirrors and M-specific gills behind the front wheels. A set of 20-inch alloys with black details complete the look.

At the back there’s quad exhaust pipes incorporated into the black lower diffuser and a lip spoiler on the boot.

At the heart of BMW’s top-of-the-range four-door coupe is a 4.4-litre twin-turbocharged V8 petrol which according to BMW has a “vast appetite for revs and uninterrupted power development over a wide rev band”… Which sounds about right – it produces 625hp and 750Nm of torque, enough to propel you and the family from 0-60mph in just 3.2 seconds via an eight-speed automatic gearbox.

Apparently, the engine’s solid mounts help sharpen its responses and enhance the sounds, although you can credit most of the noise to the the car’s standard sports exhaust.

More racetrack spec comes in the form of an uprated cooling system that includes separate oil coolers for both the engine and gearbox, and an additional oil sump that provides extra cooling capacity if, say, you take the car out on track.

The BMW’s clever four-wheel-drive system means you can get the best from it on road or track. In its default 4WD mode it has a rear-wheel biased, while 4WD Sport (when the car’s Dynamic Stability Control (DSC) is in its less intrusive M Dynamic mode) pushes even more power rearwards for controlled power slides via the rear Active M Differential. Finally, deactivating the DSC gives you 2WD mode where power is sent to the back wheels only.

The suspension, steering and brakes are also highly adjustable. Electronic dampers come as standard so you can set up the car to be comfortable for long drives, or firmer and more controlled when you hit a series of bends.

The M Servotronic steering wheel, meanwhile, can be quick and sporty in corners or lazy and less fidgety on long cruises. Finally, the brakes can be adjusted to give lots of bite with little pedal pressure or to require a hard push to make them easier to modulate on track.

The suspension, steering and brakes are all controlled via the car’s drive select and you can quickly call up your own customised settings using the M sport button on the car’s steering wheel.

Once you’ve had your fun at the track the M8 GC can transform into a relaxed and soothing cruiser, especially if you specify the Driving Assistance Professional pack.

It adds kit such as steering and lane assist, evasion assistant, junction warning, wrong-way driving warning and front-crossing traffic warning. A handful of driving aids that in plain English mean the BMW can accelerate, brake and steer itself, as well as steer you around potential collisions and stop you if you try to pull out into fast-moving traffic or try heading up the road on the wrong side.

You even get BMW’s 360-degree parking camera and BMW Drive Recorder which can save video footage to prove you weren’t (or, presumably, were) responsible for an accident.

The M8 GC is 231mm longer than the standard two-door coupe – 200mm of which is extended wheelbase that has been devoted to rear-seat space to give you enough rear legroom for adults. You can choose between two individual rear seats or a three-seater bench. Boot capacity sits at 440 litres or about 20% less than a 5 Series saloon.

If you like the sound of a cool, fast and bordering-on-practical coupe, the BMW M8 Competition Gran Coupe is on sale now priced from £121,000. The UK will also get five First Edition models that get an Aurora Diamond Green paint finish with Gold Bronze details. Prices for these cars haven’t been revealed but expect to pay a significant premium.

The M8 Competition Gran Coupe will make its public debut at the LA motor show in January before the first cars are delivered in April 2020.