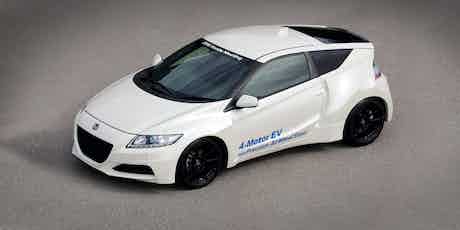 Now the wraps have come off the production-ready Honda NSX, an all-electric baby model could be in the pipeline

The Honda sports car range looks set to grow rapidly with the new NSX and S660 being joined by an S2000 replacement in 2017. Brand experts are also predicting the firm will add this – a smaller, all-electric ‘baby’ NSX – to the range in the coming years.

Honda has already experimented with an all-electric CR-Z prototype race car. It used four electric motors (one in each wheel) to power it to a win in the Exhibition class of the infamous Pikes Peak Hill Climb.

The 2016 Honda NSX previews a new styling direction for the Japanese brand. We expect its ultra-sharp edges and aggressive styling will be strong sources of inspiration for the new baby NSX.

The large air intakes and cooling vents of the NSX would be less crucial in an electric vehicle so the baby NSX may well be characterised by a smoother, less cluttered shape. We’ve seen how Tesla has designed an electric car without a functional front grille and this could be the direction Honda takes.

No details have been released about the possible interior of the new baby NSX but we can safely say it will follow in the footsteps of its bigger brother. Like that car, it’ll probably be a two-seater coupe.

The car is set to have plenty of advanced technology but will carefully considered so to not directly compete with its more expensive big brother. Build quality will have to be high to compete with sports cars from a number of prestigious names – predicting its closest competitors is difficult, however, because there are currently no mass-produced pure electric sports cars on the market.

The CR-Z race car (shown above) was the first prototype to test a likely drivetrain for the new baby NSX. Its four electric motors could produce 444hp over a limited range.

Honda is testing a second prototype with greater range and less power but has mentioned that the road-ready version could ‘easily’ top 350hp. Honda is aware that many buyers are concerned over the usability of electric cars and is aiming for a real-world range of up to 300 miles.

Honda’s electric drive system has added 370kg to the weight of its latest CR-Z test mule. Instant torque and rapid acceleration should be guaranteed but careful suspension and chassis tuning will be required to ensure it handles well, too.

A feature that helped the CR-Z prototype to a class win at Pikes Peak was an advanced all-wheel drive torque distribution system that could see action in future electric road cars.

The impressive performance of the prototype was achieved using ‘parts-bin’ components including electric motors from the US-only Acura RLX hybrid. If Honda is able to extract blistering performance out of re-used parts such as these, the baby NSX could represent a surprising bargain. A price of around £55,000 would sound about right, but we don’t expect the car to go on sale until at least 2018.

Save money on your new Honda

If you simply can’t wait for your new Honda sports car, put the fantastic Honda Civic Type R into our car configurator and check out some great carwow deals. If you aren’t sure which is the car for you, our car chooser and deals pages are great places to start looking.