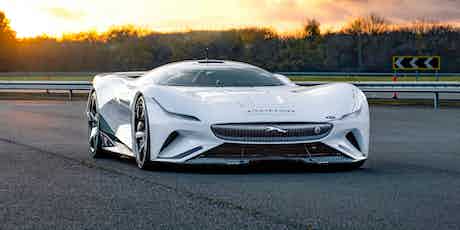 Jaguar & Land Rover have laid out plans for a new range of electric cars, including a whole range of pure-EV Jaguars by 2025 and an all-new electric Land Rover in 2024.

Jaguar and Land Rover have revealed the next steps in their plan for a range of new electric cars — with Jaguar to become an all-electric manufacturer by 2025.

The British company has laid out a roadmap to becoming a net-zero carbon emissions business by 2039, which includes a radical approach to switching over to EVs.

As well as Jaguar making the switch to becoming an all-electric brand by 2025, there are plans for all Land Rover models to be offered with an electric powertrain by the end of the decade as well.

Six Land Rover EV variants are due to arrive within the next five years, with the first coming in 2024. It hasn’t been confirmed which of its models will play host to that first battery pack, or if it will be a completely new car.

The British manufacturer hasn’t said when it aims to introduce such a car but has confirmed development is underway with a view to the first prototype cars hitting UK roads within the next 12 months.

To help with Jaguar and Land Rover’s respective moves to electric, three completely new sets of EV underpinnings will be introduced. Two of these will be exclusive to Land Rover and one will be set aside for a range of new electric cars from Jaguar.

Jaguar already has its first all-electric car in the I-Pace, which had been planned to be followed up with by a battery-powered XJ. However, the new saloon has been axed as part of these new plans.

Can’t wait for a new electric Jaguar or Land Rover? Take a look at the latest Jaguar I-Pace deals, or find offers on more electric cars