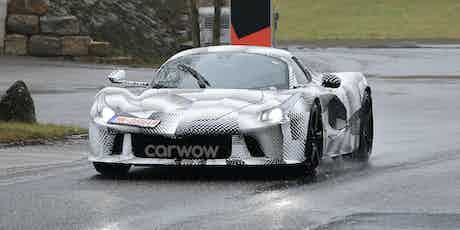 A new Ferrari hypercar could be on the horizon, with hybrid LaFerrari prototypes spotted in the wild. Read on for more details.

An all-new flagship Ferrari hypercar looks to be on the horizon, with a modified prototype LaFerrari spotted testing.

No official confirmation of a new hypercar has been made by Ferrari, but the Italian greats have recently revealed plans to enter the top-tier of sportscar racing. It’ll compete in the World Endurance Championship from 2023, which includes the famous 24 Hours of Le Mans race.

Ferrari will be in the Le Mans Hypercars (LMH) class, which sees road-derived race cars compete for top honours. Other manufacturers entering this new serious include Toyota with its GR Super Sport – a road-going version of which has been teased — and Peugeot, with rumours circulating of Porsche and Audi joining the fray.

With that in mind, this LaFerrari test car is likely hiding an early development of the Ferrari competitor’s engine, gearbox and hybrid gubbins. This hybrid system could be a revamped version of the LaFerrari’s plug-in V12 setup, or it could have been developed from the four-wheel-drive hybrid system fitted to the latest SF90 supercar.

It’s hard to see much in the way of visual tweaks underneath all of the camouflage, though the front bumper has had its central pillar removed and the rear bumper looks to have dummy exhaust exits. It appears as though the real pipes are hiding behind some metal mesh at the centre of the rear – look closely and you’ll see the metal wire appears to have been discoloured by heat.

The new car’s bonnet looks to be flatter, potentially to make room for an extra electric motor to drive the front wheels – just like in the SF90.

If you’re a real anorak, you might have even noticed this prototype ditches single-lug, centre-locking wheel nuts in favour of a more conventional five-bolt setup (as in most normal road cars.)

It’s likely that the new hypercar will look drastically different from the LaFerrari though, which was initially introduced in 2013, so don’t expect this prototype to hint too much at the final design.

Beyond that, what this Ferrari is hiding remains a mystery. Be sure to keep your eyes peeled for more information, though.