News Car manufacturers called on to do more to protect pets

Car manufacturers called on to do more to protect pets 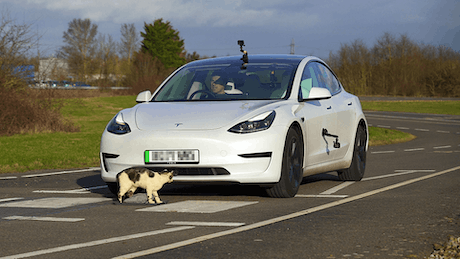 Car manufacturers are being welcomed to improve their driver assistance systems to stop for pets as a carwow investigation revealed two cars would not stop for a taxidermied cat or a life-like dog model.

A leading animal-welfare charity has called on manufacturers to design their cars so they stop for cats and dogs.

The RSPCA’s plea comes as a carwow investigation has revealed that two cars currently on sale did not automatically stop for a lifesize model cat and dog*.

Autonomous emergency braking (AEB) systems scan the road for pedestrians and vehicles, automatically applying the car’s brakes if the driver fails to react to an obstacle.

But while AEB is designed to stop for pedestrians and vehicles, and some systems include large-animal detection, smaller animals such as cats and dogs tend not to be detected or reacted to by AEB.

Both a Tesla Model 3 and Volvo V90 equipped with driver assistance systems, including AEB, did not apply the brakes when each approached a lifesize model dog or a taxidermied cat in carwow’s exclusive study.

The Tesla stopped for a model kangaroo, which its sensors perceived as being a pedestrian, while both cars automatically braked for two lifesize celebrity cardboard cutouts.

carwow’s research in this field has led to the RSPCA saying it would “welcome car manufacturers developing auto-braking systems that detect pets as well as people and other vehicles”.

“We know how devastating it is for both pets and their owners when pets are sadly hit by a vehicle. We have also seen first-hand the tragic fatalities or severe injuries animals can suffer as a result of a collision.

“We would therefore welcome car manufacturers developing auto-braking systems that detect pets as well as people and other vehicles in order to stop tragic incidents like this from happening.”

The welfare charity Cats Protection, meanwhile, highlighted that almost one in 20 cats was injured in a traffic accident last year.

Madison Rogers, senior advocacy & government relations officer, added: “Cats Protection’s ‘Cats and Their Stats’ report 2021 found that road-traffic injuries were stated as a cause of injury for 4% of cats in the UK.”

*carwow recognises that the model animals used in its experiment are not necessarily representative of real animals due to different properties of density and constitution.